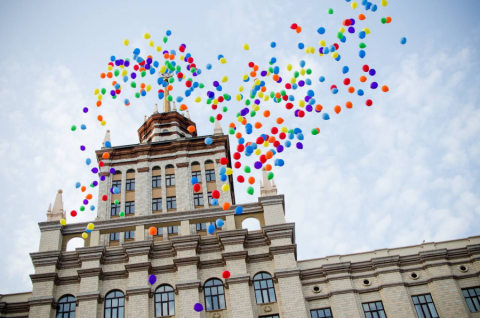 On August 31st, a series of festivities dedicated to the Knowledge Day will be held at South Ural State University. The events will include the 2019 Matriculation Ceremony.

At 10:00, the SUSU Education and Sports Complex will open its renovated indoor athletic stadium. Here, unique works have been performed on creating of a race track with special coating, which complies with the Olympic standards, and the climbing wall’s area has been expanded.

Next, a presentation of a project “Art Needs Walls” will be held, which aims at stimulating creativity initiatives of students and is dedicated to creating graffiti art objects.

An important moment during August 31st will be the ceremony of opening of the laboratories of the B.N. Khristenko Laboratory Complex of Active Teaching Methods: Virtual Bank, and Financial Technology Centre.

After that, a meeting with the representatives of the university schools and institutes will be held. Students will receive their student ID cards and will swear their freshman oaths.

From 14:00 till 15:30, the general meeting of the academic and administrative staff, and students will be held at the Activity Hall, where SUSU Rector Aleksandr Shestakov will deliver his speech.

At 16:30, on the university square, the 2019 Matriculation Ceremony theatrical performance will start, which will consist of three parts. The first one will be the official part, where the directors of the schools and institutes will be introduced to students, and in the Prologue of which there will be performances by Deep Vision dance theatre and Mannequin Theatre Studio. The second part will feature a concert-presentation of the SUSU creativity groups and studios; and the third part will be a disco party organized by D-club with its entertainment program.

SUSU-TV television and radio broadcasting company will record a full video version of the grand meeting, and will also be covering all the festivities to be held on the said day. You could watch the videos on the following web-sites: susu.ru, tvr.susu.ru; web-pages: vk.com/susu4you, vk.com/susutv, as well as streaming from the television company’s youtube channel.