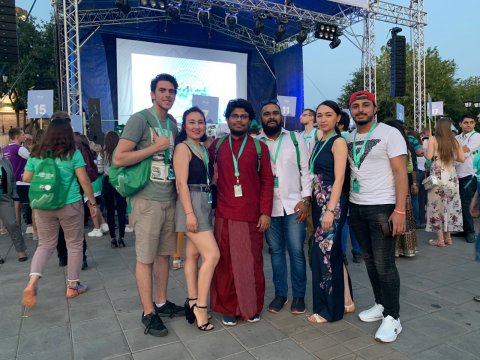 From the 12th till the 17th of August, Eurasia Global International Youth Forum brought together 800 young people from around the world, representing 108 countries and 80 regions of Russia. SUSU representatives were officially invited to the Forum by the Association of International Students.

“Our South Ural Association of International Students has been established only five years ago; it is very young, so our student activists need to adopt useful practices from representatives of other associations in order to arrange the global forum called Ural Fest. This is exactly why we readily accepted the offer to participate in Eurasia Global Forum. Today we are busy preparing to the first international forum of South Ural international students, the idea of which has been generated by us ourselves. And it is now exactly that we need the experience of arranging such forums. Eurasia Global is a very famous all-Russian forum, and taking part in it is very useful for arrangement of our own forum,” explains the President of the Association, Uvindu Wijeweera.

The team of the South Ural Association of International Students was the most active one at the forum: SUSU representatives participated in every master class, contest, workshop, lecture and sport competition. The SUSU team took the first place in a game regarding customs and traditions of Russian people.

It was for the first time that speakers at the forum were not just invited guests but also the activists themselves. For such a type of interaction between participants of the forum, a special format called Program 2.0 had been introduced. Each of the participants who had one’s own project, topic or idea could fill in an application form and deliver a speech in front of other participants after selection stage. Overall, there were 120 original proposals for Program 2.0 submitted during the course of the forum. The President of the South Ural Association of International Students, Uvindu Wijeweera, delivered two presentations in the Program 2.0 format: one regarding the South Ural Association of International Students, and another one regarding his home country Sri Lanka.

In the course of the forum, activists of SUSU AIS got familiar with many speakers, valuable specialists in their spheres of activity coming from Moscow, London and other cities and countries such as France, USA, and Near East countries, who have been invited to SUSU for the Ural Fest Forum. In particular, a meeting of the activists with the President of the World Alumni Association, Vladimir Chetiy, was held within the forum. He invited SUSU representatives to take part in many interesting projects. Moreover, participants of the forum had a unique chance to communicate in person with the official representative of the Ministry of Foreign Affairs of the Russian Federation, Maria Zakharova, who paid an official visit to the forum.

One of the important results of the forum is continuation of Uvindu Wijeweera’s project called Russian-Sinhala Dictionary. The project excited Vladimir Chetiy’s interest, so he offered the author to maximally extend the Dictionary by adding languages of the countries from which students come to get a degree in Russia more often. Nowadays, there are separate dictionaries but there is no general one. Translation software in Google and Yandex make multiple mistakes. The new dictionary will become a common program for all languages (French, English, Spanish, Hindi, Japanese, Chinese, etc.). The Dictionary will be recommended to be used within pre-university training courses for international students at universities. The Dictionary is supposed to be created at the premises of SUSU. It is planned to get the university’s programmers involved in development of the Dictionary. Vladimir Chetiy offered his help in obtaining a grant for this project. He is also planning to involve professors from the largest universities (RUDN etc.) to development of the Dictionary. International students of SUSU are going to take part in development of the Dictionary as well. The quality of the finished Dictionary is planned to be verified at the Ministry of Education and Science of the Russian Federation.

One of the members of SUSU delegation was postgraduate student of the Department of Russian as a Foreign Language at the SUSU Institute of Linguistics and International Communications, Rev Waskaduwe Siri Sarana Thero. He was invited to the forum for the third time as a constant participant representing SUSU. Siri Sarana took part in a contest of grants for education with a topic dedicated to development of intercultural communications. The project presented by Siri is a continuation of his graduation thesis which he had been preparing in the frameworks of a programme entitled “Theory and Practice of Foreign Language Teaching”. Siri Sarana compares systems of the two languages and aspires to create a nationally-oriented Russian language textbook for the Sinhalese.

Moreover, the delegates took part in a contest of short videos on How Various Nations around the World Regard the Pushkin. On the video, couples representing Pushkin and Natalia Goncharova cited poems of the great poet in their native languages: English, French, Russian, Hindi, Urdu (Pakistan). Uvindu Wijeweera together with his colleague from Orenburg took part in the contest, in the course of which the President of the South Ural AIS cited Pushkin’s poems in Russian and English. In the end, all the videos presented at the contest were united into one long video on How Foreign Citizens Regard the Pushkin. By common opinion of SUSU delegates, Eurasia Global forum was very useful for them. In the course of this large-scale event, each of them got a unique experience of working in a team, and the speakers allowed them acquiring new knowledge that will surely come in handy when arranging the first international festival of international students and alumni in Chelyabinsk – the Ural Fest. 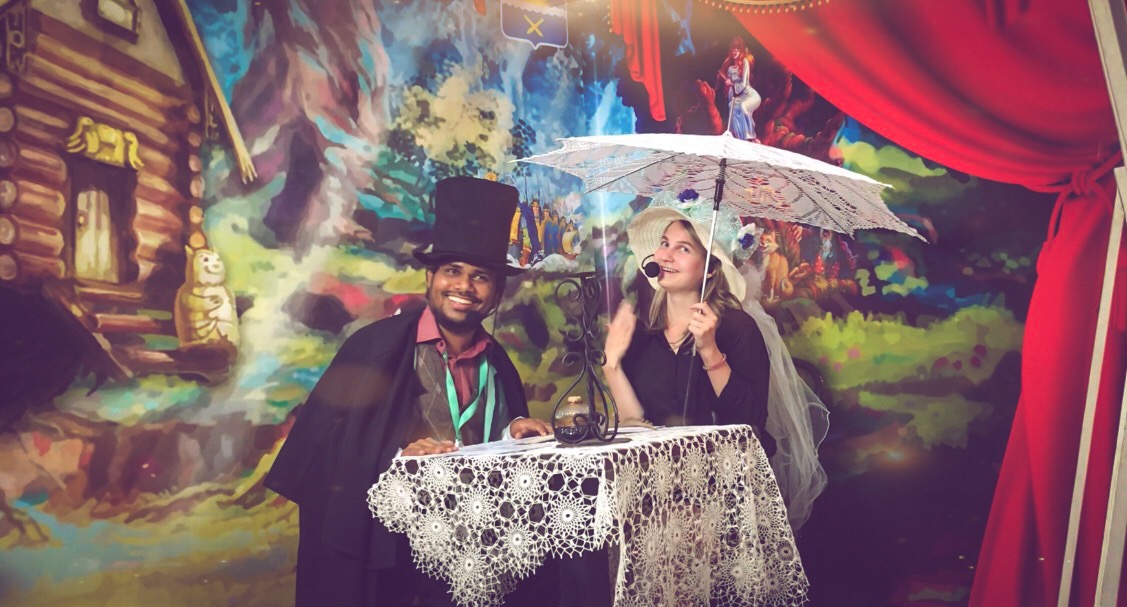 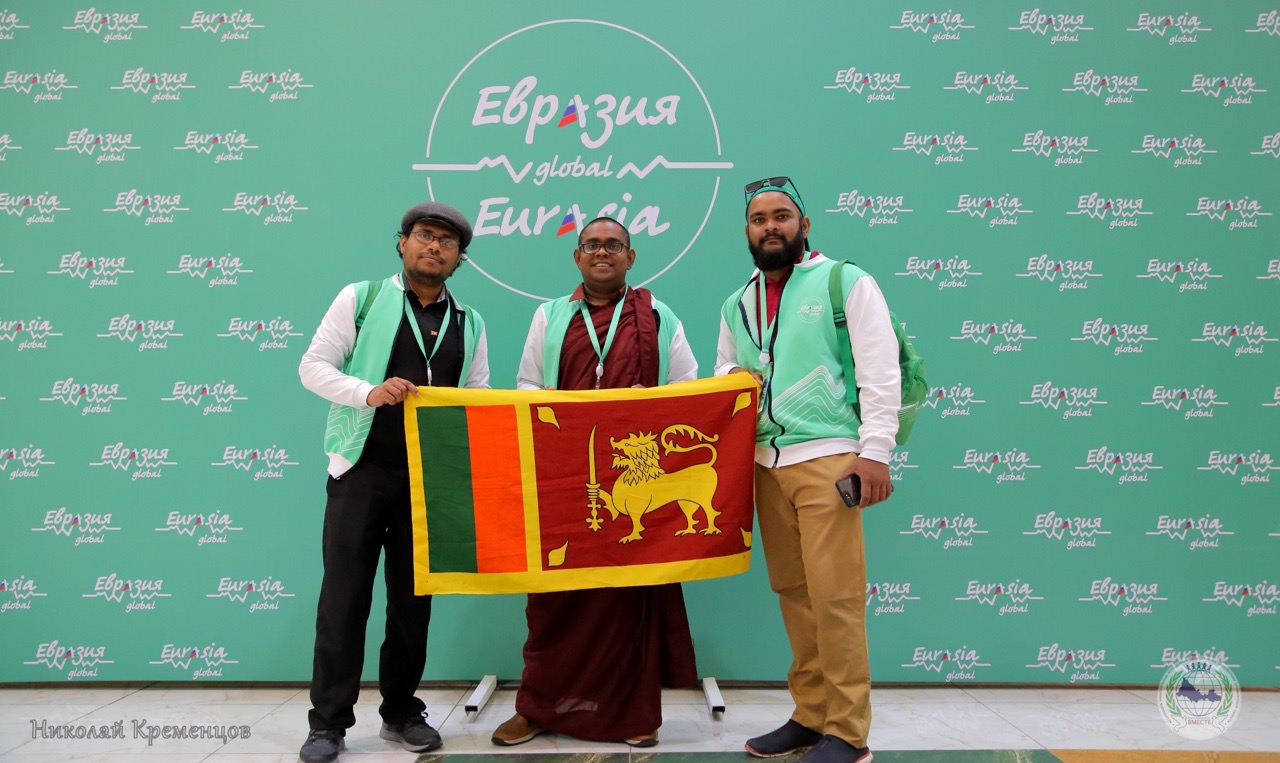 Text by Yulia Rudneva, photos from personal collection of interviewees