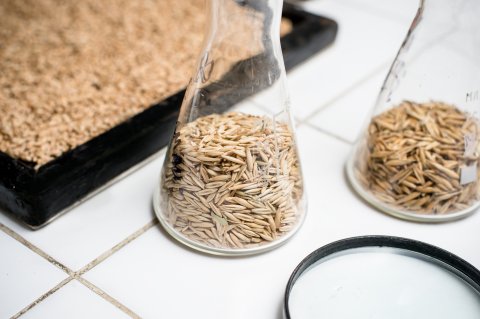 Many nutritionists believe that rye bread is superior in nutrition and balance to other foods. However, there are other opinions that the nutritional value of products produced in accordance with national standards does not correspond to modern concepts of healthy nutrition. Therefore, scientists from the South Ural State University have created and patented their Borodinsky bread recipe using chia and sesame seeds.

Bread is a source of vitamins and minerals

The introduction of ingredients forming therapeutic, prophylactic and functional properties into the bread recipe can solve several problems at once, including the deficiency of essential nutrients in the diets of Russians. In this regard, the scientists of the Higher Medical and Biological School of SUSU developed a new Borodinsky rye-wheat bread recipe obtained using non-traditional vegetable raw materials, namely flour from a mixture of ground chia and sesame seeds.

“Chia is a single-herbaceous plant of Salviahispanica, of the family Labiatae, which grows in Latin and South America, Mexico, and Argentina. Chia seeds have been consumed for a long time by the population of Latin American countries, the usefulness of which has been tested by time and confirmed by the results of modern research. The considerable nutritional value of ground chia seeds is due to the presence of valuable components: food soluble and insoluble fiber, omega-3 and omega-6 fatty acids, tocopherols, minerals,” says one of the authors of the innovative recipe Natalya Naumova, professor of food and biotechnology at SUSU.

The choice of sesame flour as one of the essential components is also due to its significant biological value and a broad range of therapeutic and prophylactic effects. Useful ingredients of flour include a number of essential amino acids, as well as fiber, polyunsaturated fatty acids, water, and fat-soluble vitamins, macro, and micronutrients.

The “Borodinsky Improved” bread developed by SUSU scientists is characterized by a significant content of protein, lipids (due to an increase in the amount of polyunsaturated fatty acids of chia oil), dietary fiber, and mineral elements against the background of a decrease in gluten load on the human body.

“A mixture of chia and sesame seeds flour contains a record amount of copper, calcium, iron and other minerals, has a balanced amino acid composition, which helps to increase the nutritional and biological value of the finished product,” explains Natalya Naumova.

Designing a recipe with mathematical precision

Calculation of the laying of non-traditional components and modeling of the formulations of prototypes of bread was carried out jointly with Ksenia Vasyuchkova, a graduate student of the Department of Equations of Mathematical Physics of the Institute of Natural and Exact Sciences of SUSU. Using the software package of mathematical and functional analysis made it possible to obtain reliable information about the micronutrient composition of innovative development.

“We found that the content of selected macro- and micronutrients, the developed Borodinsky improved bread composition significantly surpasses the Borodinsky bread prepared according to the traditional recipe. Therefore, the amount of calcium in the experimental bread sample exceeds its content in the control bread by 1.6 times, copper - by 1.5 times, iron - by 3 times and magnesium - by 1.3 times,” says Natalya Naumova.

Consequently, the new Borodinsky improved bread composition can compete with Borodinsky bread prepared according to a traditional recipe and become modern foods with functional properties in the human diet.

Scientists of the Higher Medical and Biological School of SUSU over the past few years have patented more than 10 ways to produce functional foods with unique properties. For example, a patent was obtained for the creation of functional meat pudding using sesame flour. Sesame meat pudding has high consumer characteristics, is characterized by a modified composition of proteins, fats, carbohydrates, and increased mineral value. Such experts as meat production technologist, Ph.D., associate professor of the SUSU Department of Food and Biotechnology Alexander Lukin and MD, director of the SUSU Biomedical Technologies Centre Olga Tseilikman participated in the development of innovative meat products with a balanced nutrient composition.

The SUSU scientists are planning to study the effect of biologically active substances of unconventional plant materials, such as chia seeds and sesame seeds, on the composition and vital activity of starter microflora and the provision of the antioxidant component of the developed innovative bakery products.