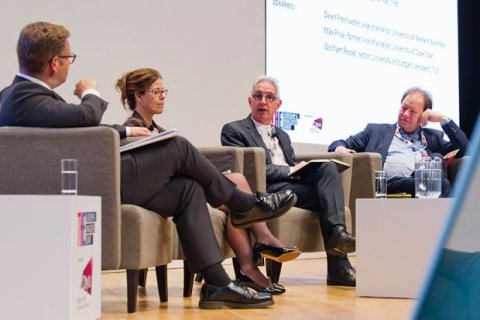 South Ural State University took part in a Leadership & Management Summit arranged by the Times Higher Education ranking agency, at which leaders of universities from around the world could exchange the experience of administration and management in the sphere of higher education under conditions of the 21st century. The Summit was held July 17th through 19th in Hong Kong.

SUSU was the only Russian higher education institution which presented a report at the THE Summit. Vice-Rector for International Affairs, Olga Yaroshenko, acted as a speaker at a plenary session regarding the search for a sustainable financial model of a university. THE experts noted that reduction of state financing of higher education is a global challenge for higher education institutions in many countries around the world. The Vice-Rector talked Vabout maintenance of SUSU’s economic stability and of the university’s financial model intended to gain profit from operation of research and education centres and laboratories.

“From its foundation day in 1943, the university often had to take financial risks, but they practically always proved to be worthy. At this Summit, we presented SUSU’s experience and told the representatives of universities from around the world about opening and closing of our university’s faculties and branch institutions, and provided substantiations for that. Participants of the Summit got especially interested in the way that SUSU implemented new ideas which allowed it to maintain financial stability and even gain profit. Among them as arrangement of its own training and production sites on which assignments upon orders from the university’s partners get completed. It is important to note that operation of all laboratories and centres involves students where they can implement projects within project-based learning. The fact that students get involved in this activity and master their professions through practice appeared to be especially valuable for representatives of European higher education institutions,” noted Vice-Rector for International Relations, Olga Yaroshenko.

Upon results of the SUSU Vice Rector’s report at the Summit, new possibilities of interaction with universities which form the world’s elite of higher education have been determined. A big number of proposals connected with academic student exchange were made by universities of China, India and Malaysia. The issue of research cooperation and academic exchange with foreign lecturers has been discussed as well. Moreover, contacts have been established with representatives of higher education institutions of European countries: The University of Glasgow, the University of Birmingham (Great Britain), the University of Oklahoma (USA), etc.

“The fact that THE Agency invited our university to a global summit is very important for us. Participation in this event is a unique chance to learn how foreign universities operate and how they’ve become the leaders of higher education, as well as share the story of the unique path of SUSU’s establishment and development. During the Summit, we managed to get familiar with approximately 50 university representatives from many countries of the world, with whom we can hopefully cooperate in various spheres,” emphasized Olga Yaroshenko.

As a reminder, Times Higher Education is one of the most authoritative ranking agencies which evaluate development of universities all over the world. THE has a unique experience regarding the tendencies forming the foundation of universities’ activities. THE summits act as the venues for global discussion of problems and possibilities for improvement of higher education.