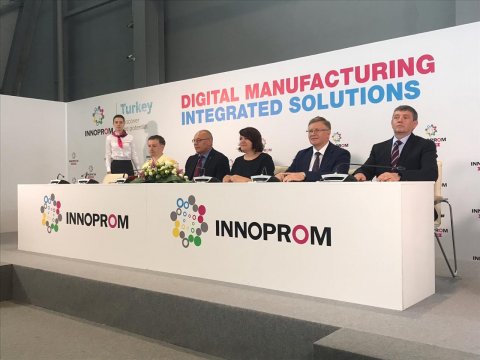 July 10 of 2019 in Yekaterinburg at the INNOPROM-2019 international industrial trade fair, rectors of the largest higher education institutions of the Urals concluded an agreement on integration and cooperation of participants of a world-class science and education centre. South Ural State University was among participants of the new educational Centre. Previously within the INNOPROM on July 9, an agreement on cooperation in the sphere of research-and-manufacturing cooperation within the Nauka (Science) national project was signed by Acting Governor of the Chelyabinsk region, Aleksey Teksler, Governor of the Sverdlovsk region, Evgeny Kuyvashev, and Acting Governor of the Kurgan region, Vadim Shumkov.

The agreement between higher education institutions and companies of the real sector of economics, signed on July 10, has become the next step in development of interrelations between the regions within the Nauka federal and national project.

The Ural Interregional Research and Education Centre includes the most authoritative higher education institutions, research organisations and companies of the real sector of economics of the Sverdlovsk, Kurgan and Chelyabinsk regions. Operation of the Centre is targeted at development of research directions in the interest of industrial enterprises. In an outlook, it is going to become an impulse to an efficient development of industries in all the three regions. The Centre is being established at UrFU, which is responsible for coordination of its overall operation programme. Within the cooperation, SUSU is responsible for coordination of the Centre’s activity at the territory of the Chelyabinsk region.

Aside from higher education institutions, business representatives take part in the cooperation as well. There are two industrial partners of SUSU who took part in the ceremony of signing the agreement on July 10 as representatives of the Chelyabinsk region: Autonomous Non-profit Organisation “South Ural Industrial Cluster for Production of Elements and Units of Road, Construction and Agricultural Machines” and Chelyabinsk Electric Equipment Plant JSC. In the future, other important industrial partners of our university are planning to take part in operation within the agreement.

“Being presently implemented is the stage of preparation and formatting an application for the REC which is to operate within the cooperation of the three regions. SUSU is going to present a number of research projects reflecting the strategy of the University’s developing in the following key directions: Digitalization, Materials Science, Space and Rocket Equipment and Ecology. It should be noted that each project must have an industrial partner,” explains the university Rector, Aleksandr Shestakov.

Text by Yulia Rudneva, photos from personal collection of the interviewees