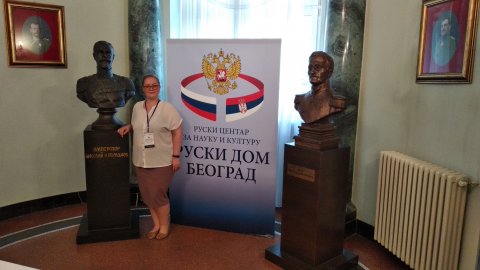 June 29th through June 30th, a regional meeting of international alumni from Russia was held by the Global Alumni Alliance at Russkiy Dom (Russian House) Russian Centre for Science and Culture in Belgrade. Representatives of South Ural State University took part in this event.

On June 29th, the opening ceremony was held for the Regional Forum of International Alumni from Russia in Serbia, a major event for alumni in the Balkan region. The event was organized by the Global Alumni Alliance and supported by the Federal Agency for the Commonwealth of Independent States Affairs, Compatriots Living Abroad, and International Humanitarian Cooperation (Rossotrudichestvo), and the Presidential Grants Foundation.

In his speech at the event, President of the Global Alumni Alliance Vladimir Chetiy stressed the main goal of the forum: to make the alumni’s circle of contacts more diverse, and achieve collaboration with government authorities, alumni associations and business organizations.

The event was attended by more than 100 people: representatives of six Russian and five Serbian universities, and heads of the associations of international alumni of Russian universities in foreign countries. One of the attendees was Head of the SUSU International Office Liudmila Lapina.

“Alumni are the key “product” of universities; these are the people who represent their university, and so it’s crucial to keep communicating with them even after they graduate from university. This event has allowed to discuss with various experts the issues related to promotion of and the methods of working with international alumni and alumni associations beyond the Russian Federation, as well as establish business and humanitarian contacts with the representatives of alumni associations from different countries in Europe and Middle East. It’s quite possible that in the nearest future, our university will continue its international development already using this instrument – opening a SUSU Association of Alumni,” shares Liudmila Lapina.

Also within the frameworks of this event held at the Russian House, round tables were organized on the Legal Aspects of Creating and Developing of an Alumni Association; Admitting International Students to Russian Universities; and Interaction with Business Communities. Liudmila Lapina also had a chance to present the achievements and prospects of the SUSU development to the participants in order to form a positive image of our university and attract new international partners.

Following the results of the forum, the participants discussed the Road Map of further development of the activity of the regional European Coordination Council (European Association) of the Russian Universities’ Alumni at the Global Alumni Alliance.

SUSU has been a member of the Global Alumni Alliance since December 2018, when the Association President Vladimir Chetiy visited our university and signed a collaboration agreement with Rector of South Ural State University Aleksandr Shestakov.