Experts of THE Ranking Agency about SUSU: ‘You’re Stepping up to a New Global Level’ A seminar by Times Higher Education (THE), one of the most authoritative ranking agencies assessing the development of the world’s universities, has been held at South Ural State University.

Times Higher Education has an unprecedented experience in the trends, on which the university activity across the world is based. The leading experts in this field – Strategic Solutions Director at Times Higher Education Michael Caruana and Data and Analytics Director Duncan Ross – have analysed the SUSU’s standing and gave valuable recommendations to the seminar attendees: directors of the schools and institutes, deans of faculties and heads of departments. 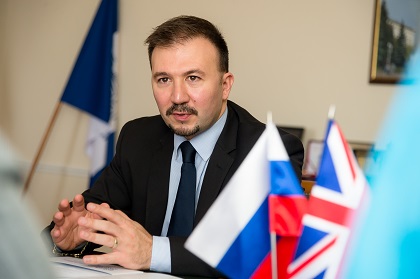 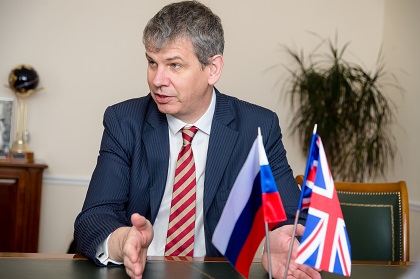 Constant development of SUSU is a crucial condition for its competitiveness, without which the university would not be able to provide quality education, release truly qualified and in-demand specialists, or make its contribution to the life of our region and of our country in general. Rankings show the university’s standing in the global space, what allows to improve our university’s work, noted SUSU Rector Aleksandr Shestakov:

“Our university has a certain development strategy, and we are moving along the path that we have chosen. But for us to succeed in the rankings, we need to understand their methodologies and to work hard. We appreciate our collaboration with Times Higher Education agency. I would like every participant of this seminar to analyse their work and try to search for the ways, which would help improve our activities aimed at the development of our university.” Every year, the agency publishes THE World University Rankings, which is considered to be one of the most authoritative ones among the rankings of higher education institutions of different countries. Starting from 2010, this ranking has been published based on a fundamentally new methodology; and if a university gets to be included in the ranking’s list, it is considered as a serious recognition of its work. Besides that, Times Higher Education compiles a reputation ranking, ranking of young universities, subject-related rankings, as well as regional rankings.

“SUSU is collaborating with 23 ranking agencies, but Times Higher Education is among the key ones for us since we aim at being listed in their ranking of the world’s top universities – THE World University Rankings. Last year we had progress with this regard when we got listed in the THE Impact Ranking and took a good place of 301+. N September THE WUR will be published, and we hope to see our university included into it as well. Such a meeting with the leading analysts of an authoritative ranking agency is important because the world-class experts can give us their recommendations,” shared SUSU’s Vice-Rector for International Relations Olga Yaroshenko.

The experts noted that there exist more than 25,000 universities in the world, and only about one thousand of the best ones get to be listed in their THE WUR ranking. At the stage of its compiling, the information provided by the universities themselves is taken into account, as well as the results of surveys in the academic community, bibliometric data on the publication activity and citation of the academic staff, and much more. The total of 13 metrics is taken into consideration for the drawing up of TOP 1000.

In the course of the seminar, the THE experts presented the general review of the THE WUR methodology and shared on the trends in rankings promotion of the past years. They also performed an analysis comparing SUSU to other universities in Russia and across the world and highlighted the growth potential, including with regard to development of digital industry and establishment of new scientific collaborations.

“We see that the system of higher education in Russia has significantly progressed. It used to be more detached and developing within certain scientific fields. But today I’d like to note the activity of Russian universities, including SUSU, in establishing new partnership relations with scientific schools and international organizations. Now you’re stepping up to a new global level, new partnership interactions and development with regard to the world rankings. Of course, digitalization is an extremely important sphere, and the SUSU’s successes here look impressive. However, the rankings should not be a goal in and of itself – they should serve as an instrument and draw your attention to those fields, which need to be reinforced,” stressed THE Data and Analytics Director Duncan Ross. 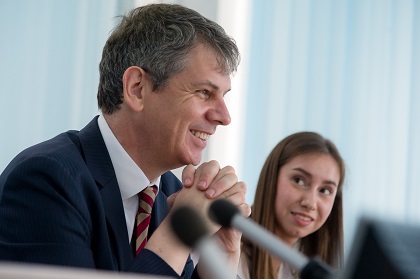 The strongest sides of SUSU, according to the analytics, are the university’s close collaboration with industrial partners, the student-to-faculty ratio, and the number of international students. Also, the university’s indicators in its publication activity and citations are quite good among Russian schools of higher education. All of that proves that SUSU has every chance of being listed in THE WUR in the nearest future, says the agency’s Strategic Solutions Director Michael Caruana.

“The university has achieved a breakthrough in scientific research. The THE rankings are very strict in what concerns complying with the criteria on assessing the research activity: every year universities must be publishing no less than 150 scientific papers. It is very difficult to achieve the required indicators, but SUSU has managed to do that. SUSU has every chance to get listed in our world ranking. For that, it needs to put a complex focus on all the research studies being carried out at the university. I think that thanks to the SUSU Rector’s leadership skills the university’s teams are highly motivated.”

The analysts also stressed that the rankings show the results of the universities over the past years; but for them to be successful and efficient, they need to determine the priority fields for themselves and focus on the strategies, which will help develop these. Also, to be able to improve their work, universities need to understand in what they can be unique, how they can influence their region and country, and know what people work in these institutions of higher education and what inner culture these institutions have. The complex of all these things allows to intensively develop and reach new heights.

We should note that South Ural State University has significantly progressed in the world arena. The most important achievement of SUSU in its rankings promotion is that our university is currently part of the world’s educational elite, according to the authoritative ranking agencies. Thus, for instance, for the second year in a row, our university has been taking place 801–1000 in QS World University Rankings, which is also considered to be one of the most prominent among the world rankings.

You can read more about the standing of the major university in South Ural region and one of the leading universities in Russia in the international scientific-and-education space here.