On May 7, ceremonious events held within celebration of the 74th anniversary of the Victory in the Great Patriotic War took place at South Ural State University.

As per tradition, the celebration started with a shooting competition held at the Marksmanship Centre at SUSU. This year was the third time of holding this competition. Teams representing the university’s leadership, higher schools, institutes and other subdivisions, listened to instruction and started competing for the title of the best team of shooters.

“In 2016, we decided to hold the competition as part of celebrating the 9th of May. This year, we arranged a new interactive shooting gallery: there is a shooting field with moving objects that is screening on the wall. A shooter must hit all targets for a time. Correspondingly, the one to spend a lesser time to complete the task is the winner,” says Director of the Marksmanship Centre at SUSU, Nikolay Maksimov. 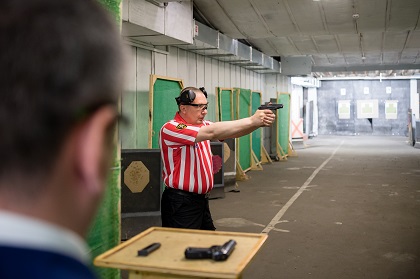 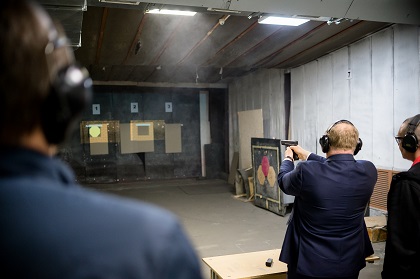 At 10 a.m., a ceremonious lining up of attendees of the Faculty of Military Education took place on the main university square. More than 200 students sang the anthem of the Russian Federation in unison, accompanied by the military orchestra of the Chelyabinsk Red Banner Military Aviation Institute of Navigators.

Then followed an exhibition performance by students of the Chelyabinsk Red Banner Military Aviation Institute of Navigators and an independent reconnaissance battalion of a military unit located in the Chebarkul military post. Two heroes of the Russian Federation served in this battalion. Spectators of the ceremonious event were shown the art of hand-to-hand combat performed by reconnaissance officers. This marital art has been mastered by every soldier of the battalion to fight successfully against the rivals. 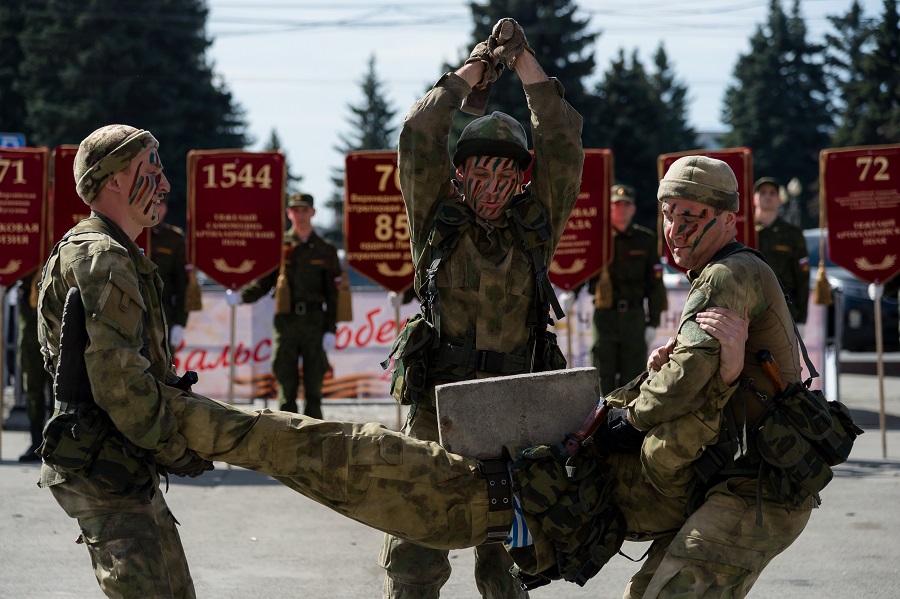 At noon, attendees of the Faculty of Military Education and administrative staff of the university took part in the ceremony of laying flowers to the Eternal Flame on the Alley of Fame. The Rector of SUSU, Aleksandr Shestakov, told us why this activity is an inextricable part of celebratory events.

“The Victory Day is a big holiday in our country. We always prepare thoroughly to celebrate the Victory Day. We think that on this day we have to pay tribute to the memory of those our ancestors who fought for this victory not just on the battlefield but also in the home front, because people there fought for the victory at the limit of their physical capabilities as well. The act of us laying flowers in front of the Eternal Flame is a tribute to the great heroic deed of the people of our country, to the heroic deed of Chelyabinsk residents who made a big contribution to this Victory.” A meeting of the Rector of South Ural State University, Aleksandr Shestakov, with veterans of the Great Patriotic War is traditional as well. Celebration in honor of veterans, labour front participants, siege survivors, prisoners of war stockade, children of soldiers killed in the Great Patriotic War and war veterans took place at SUSU’s Pushkin Hall. The Rector noted that veterans are the main value of our university, and working with them has always been reliable.

“I would like to wish SUSU students to remember us and be worthy and real, just like us. I wish them to be devoted to their Motherland and work for its well-being,” said veteran of the Great Patriotic War, Veniamin Myslyaev.

The university Rector congratulated all veterans with the Great Victory day and handed them flowers and presents. For the fifth time, South Ural State University organised the Victory Waltz, a dance flash mob dedicated to the act of heroism by Soviet soldiers in the Great Patriotic War. More than 200 people took part in the activity.

“Today, about 140 couples waltzed in front of the main SUSU building. We are glad to notice that this is the second year in a row when students of Lyceum No.11 take part in the activity. Second-grade students made small presents with their own hands to give them to veterans,” said Chief editor of SUSU-TV Television and Radio Company, Natalya Tuchkova, also acting as the author of the idea and organiser of the flash mob. The Victory Waltz is rightfully considered as one of the most massive activities within celebration of the 9th of May. As an act of eternal commemoration and gratitude for the great bravery and dedication of the Soviet people, young men and women danced to the music of waltz to which their ancestors danced in the distant 1945.

“I’ve participated in the Victory Waltz for the first time. For me, it’s a very patriotic and heartwarming campaign. The veterans gained this victory for us. We’ve always remembered and will remember about their heroic act,” said SUSU student, Adelina Serebrennikova.

This year, elderly couples – participants of the city project called “Celebrants of the Gold Jubilee of Marriage Life” – waltzed alongside the students. The flash mob was supported by the orchestra of the Department of Rosgvardia for the Chelyabisnk region, which performed celebratory compositions. At the end of the number of activities held to celebrate the 74th anniversary of the Victory in the Great Patriotic War, a celebratory concert took place in the Activity Hall of SUSU. The concert was dedicated to remembrance of veterans and home front workers who survived the war and worked as lecturers at the Chelyabinsk Polytechnic Institute in the peaceful time. Performance teams of SUSU’s Art Centre took the stage with songs and dances of the war years. The final song entitled “The Victory Day” was performed by singers together with the audience of the Activity Hall.