“We Must Not Forget about the War”: Natalya Tuchkova, the Victory Waltz Organiser, on the Most Moving Campaign of SUSU 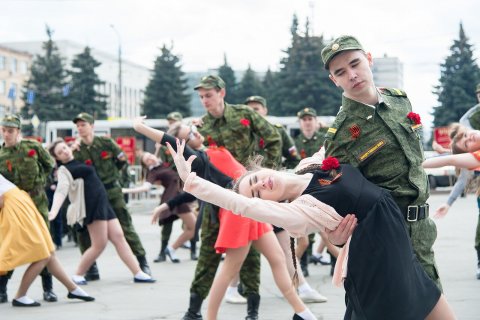 South Ural State University will be holding the fifth, anniversary Victory Waltz, a dance flashmob devoted to the heroic act of the Soviet soldiers during the Great Patriotic War. This moving campaign was held in 2015 for the first time, and it is being organized on an even bigger scale year after year. What was the first campaign like? How are the people making this celebration happen? How is the project being developed now? Natalya Tuchkova, the author of the idea and the chief editor of SUSU-TV television and radio broadcasting company answers all of these questions.

– Please, tell us about how the idea of the Victory Waltz came into being at our university?

– Victory Day is a very special holiday for me since I am a daughter of a war veteran. And back then it was a 70th anniversary of Victory Day, and I wanted to do something really special, bright and beautiful. In a way, to say “Thank You!”. That’s how the idea was born to organize a big-scale Victory Waltz dancing. This waltz symbolizes the heroic act and the ending of war. The very same waltz people were dancing back in the year of 1945. Now the dancers are the great-grandchildren of the victors, for whom it is important to remember the great heroic act of their great-grandmothers and great-grandfathers.

We’re not the only ones in doing this. The idea of the 2015 Chelyabinsk Victory Waltz was a logical continuation of the International Youth Victory Waltz Campaign, which is a world-scale dance flashmob symbolizing the unity of generations, countries and nations for the sake of peace on the planet.

– How did you prepare for the Victory Waltz back in 2015?

– It was emotional. It was easy and difficult at the same time. It was easy because the idea of the organization received immediate feedback and support from everyone I addressed with it. As there’s probably no family in Russia, which wouldn’t have a war veteran. And it was difficult because not everyone felt brave enough to go waltzing around in front of the hundreds of people of the audience. As the dance flashmob participants are not professional dancers, but ordinary university students. And we even wanted to make it in a form of some sort of a theatrical dance performance. Back then we were helped by GallaDance Riverside dance club, who also acted as a co-organiser. The task that we set – 70 dance couples to honour the 70th Anniversary of the Victory Day – was fulfilled, and we even moved beyond that. The first waltz campaign was truly unforgettable. Already when we started preparing it, we as the team of organisers knew that we would like this campaign to become a SUSU tradition. So, as you see, this year we will be dancing the Victory Waltz, our Gratitude Waltz, for the fifth time in a row.

It’s getting easier to organize this campaign from year to year, and this probably points to a fact that this flashmob has been well-accepted and has become an expected-for event. We don’t even have to ask anyone. I was really touched this time, as when I was calling to rent the dance hall for rehearsals, I got the following reply from the manager: ‘I’ve been waiting for your call and have already made a reservation for you’. My heart melted.

– How do you see the development of the campaign today?

– It’s difficult for me to judge. Our audience and participants should do that. One thing I can say for sure: people love and wait for our Victory Waltz. Year after year its scale is getting bigger as per the number of participants. In 2015, a little over 70 dance couples took the impromptu dance floor. Those were students of the Faculty of Military Education and of the Institute of Social Sciences and Humanities. And already the following year there were representatives of all our schools and institutes. The number of participants grows every year. Last year there were more than 150 dance couples on the impromptu dance floor. The campaign has become a university-wide one. And now we dream that the university academics and administrative staff join us too. 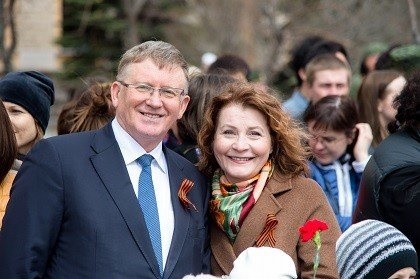 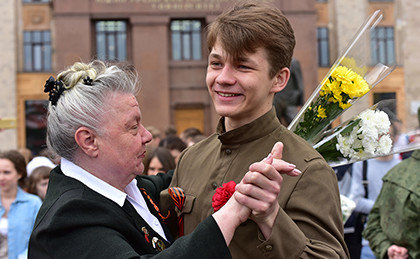 – Many people note that the participants are dancing quite well. How are the members of the organization team?

– The organization team has remained the same practically since the very first day. Choreographer Tatiana Muller, a SUSU alumnus, is the long-time production director of the Victory Waltz. Arina Martirosyan began as the campaign participant, and now is acting as the choreographer assistant for the second year in a row. Nikita Gridasov, a professional dancer and participant of the first Waltz, has agreed to help train this year’s participants.

For many students this is not the first time of participating in this flashmob. And it’s really nice to welcome these people back every year. There are those who began dancing during their first year of studies and keep doing it while it’s already their fourth year. It’s them who constitute some sort of an organizing committee.

The biggest difficulties are on the very first stages of the preparation, and those are usually related to organizational moments. The number of participants grows, and we’re happy about it. But majority of the girls and boys are not professional dancers, and some of them try waltzing for the first time ever. But are doing it all voluntarily. All those willing can participate in the flashmob, they don’t have to have be trained in dancing. It’s all about the emotions and not the moves. We purposefully did not invite any dance groups either last year, or this year. So, to make the flashmob beautiful and bright, we have to rehearse a lot. Traditionally, we begin our preparations two weeks before the event. This requires serious discipline from the participants. Our task is to teach students not just to waltz, but to do it with emotions, so that they truly understood the whole idea of the campaign. This is a Gratitude Waltz, a Memory Waltz. We try to recreate the atmosphere of May of 1945. It is for a reason that guys traditionally dance in military uniform. And girls wear dresses fashioned like those that their grandmothers wore.

– Can students from other universities take part in the SUSU’s Victory Waltz?

– Every year, the Victory Waltz organisers prepare a special surprise for the audience…

– Yes, it has become a good tradition to do something nice for our audience – war veterans, homefront workers, teachers, students and other citizens.

In 2015, a theatrical prologue opened the Waltz, and it was prepared by professional dancers, instructors GallaDance Riverside dance club.

The year of 2016: for the first time, wheelchair students from Paradoks inclusive dance group joined everyone on the impromptu dance floor, as well as the participants of Fantazia choreography studio role-model group for children, who are the laureates of Andryusha award, and the participants of Tatarochka All-Russian Contest and Udaloy Dzhigit Contest, organized by The Tatars Congress of the Chelyabinsk Region.

In 2017, a legend of the Russian pop stage, Ariel band, which is loved by everyone, supported the Victory Waltz with its performance.

The year of 2018: the Victory Waltz was supported by a performance by the military band of Chelyabinsk Higher Military Red Banner Secondary School of Flight Navigators.

For the third year in a row, Stepan Arefyev, one of the leading actors from the Chelyabinsk’s Naum Orlov Drama Theatre, is joining us. We can’t yet reveal what we’ve prepared for this year. But I’m sure, it will be a nice surprise for both the audience and the participants.

– What would you wish to the Victory Waltz audience and the participants this year?

– Good weather, first and foremost. Every year, two weeks prior to the event, I feel really nervous reading the weather forecasts. I remember that in the first year, when we were holding the Victory Waltz, there was a cold drizzle in the morning. And it kept on raining when we started our performance. And we were holding umbrellas over our veterans, and felt worried – didn’t want anyone to catch a cold. But when we were wrapping up, when everyone was waltzing around, including the audience – the sun came out. Much depends on the weather really.

I’d like to once again stress that for the majority of people this waltz is not something mandatory, people do it because their hearts tell them that they must do it. In a good and proper meaning of this expression – they repay their debt, a debt of memory and gratitude. This is just some little thing that we can do for our veterans and homefront workers. We must not forget about the war. If you want to speak about peace, you must speak about war, write about war, and dance about war!