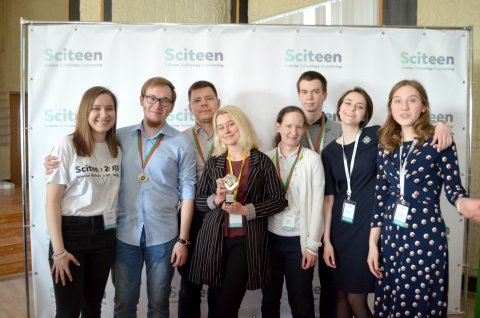 April 8th through April 14th, in Minsk, a Fifth Sciteen International Student Tournament on Natural Sciences (STEND) was held – a team competition between students from European universities on solving scientific problems in physics, chemistry and biology, which are usually published beforehand.

The tournament was held in several rounds. As a result of the selective competition, the “Young's Modulus” team reached the semifinals, winning over the teams of V.N. Karazin Kharkiv National University, Kharkiv, Ukraine; Belarusian State University, Belarus; and Lomonosov State University, Moscow. In the course of the selective competition our team presented solutions to the problems of producing in vitro meat, searching for the missing people by using neural networks, and of improving eye implants for blind people.

In the semifinals, the “Young's Modulus” team competed with the teams from Taras Shevchenko National University of Kyiv, Ukraine, and Novosibirsk State University, Novosibirsk, where students presented a problem on using topological optimization in practical engineering and discussed a problem of obtaining rare-earth metals from household appliances. As a result of the semifinals competition, four best teams made it to the finals, which was held in a play-off format. Two teams from Ukraine competed in the finals, and to be able to make it to the superfinals, our team had to compete with the team from Novosibirsk State University. Our team’s solution on detecting the formaldehydes concentration in a room was assessed higher than that of our competitors.

In the superfinals, the “Young's Modulus” team and a joint team from Ukraine and France were competing for the first place. Over the course of the whole tournament the teams showed equal results, so the competition was really intense in the end. Both teams already happened to be champions of this tournament, so this year’s winner was supposed to be the first team who had won this tournament twice. For the superfinals, it was suggested by Belaruskali company to propose a solution to the problem of improving a shuttle car for collection of sylvinite ore.

The prize awarded to the team was a certificate for a trip to one of the world’s scientific research museums, as well as an automatic pass to the in-person round of the 10th International Natural Sciences Tournament 2019, which will be held in Saint Petersburg in November.