Cosmonautics Day Got Celebrated at SUSU 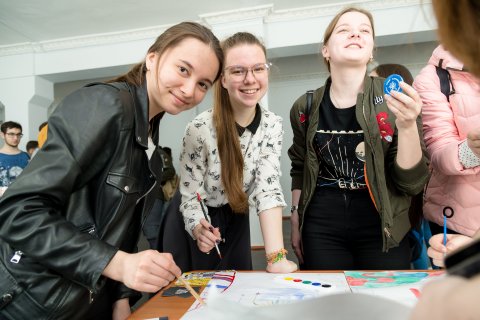 On April 12, South Ural State University presented a scientific and entertaining programme. As per tradition, organiser of the celebration was Student Council of the Institute of Engineering and Technology.

One of the most popular stations was the station where experiments were carried out with an ordinary lemon, which by its nature can generate electric energy.

First-year student of SUSU’s Institute of Engineering and Technology, Artem Litvinov, demonstrated a lemon’s operation in an electric circuit by examples. After connecting the lemon to sensors, a bulb was lightening up and the amperometer’s display showed voltage.

“Lemon battery transmits energy in 6 volts to the relay, and by doing so it closes the battery, the transistor and the bulb. The bulb lights up, which proves that a lemon is a quite good conductor. Lemon juice is an electrolyte; it generates voltage when contacting with copper.”

A participant of the event, student of the Institute of Engineering and Technology Dmitry Barsukov was impressed with spectacular experiments.

“Most of all I was impressed by the stations with lemon battery and Newtonian liquid. Students did a good job by presenting these tricks to us! What a great event!”.

The most active participants of stations received prizes: certificates to the Trampoline Centre, Mozgobojna and other entertainment centres.

Organiser of the event, student of the Faculty of Aerospace Engineering, Dmitry Antonov, summarized results of the annual event.

“The event went really well! All participants were happy with the nice gifts. The event was visited by about two hundred people, and the main interest was excited by the scientific zone as well as our animator in an alien costume.” 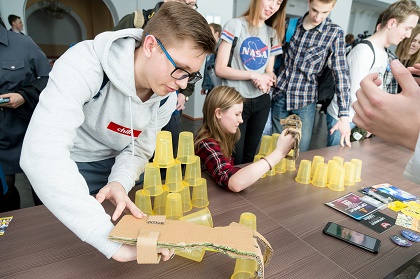 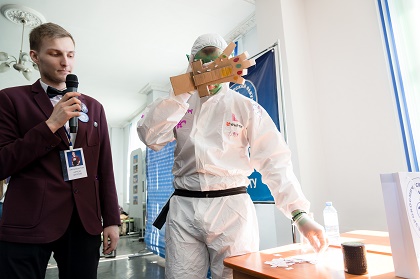 The main attraction of the programme was a lottery. During the entire event, a funny alien was giving all participants tickets with numbers on them. The host called out three numbers. Their owners received the main prizes of the event: office supplies with the logo of the Faculty of Aerospace Engineering, discount cards to a radio equipment shop, certificate for playing Laser tag, and certificates to a tattoo salon.