No Ladies Show: a Bright Performance on the Occasion of the International Women’s Day Held at SUSU The atmosphere of creativity, bright performances and an ocean of smiles – that is how the International Women’s Day has been celebrated at South Ural State University. A No Ladies Show was held at SUSU for the fair sex representatives on the occasion of the 8th of March holiday.

This year the SUSU Recreation Centre has once again prepared a unique performance for women. The main active participants were not professional performing artists but the men of our university – Rector Aleksandr Shestakov, directors of schools and institutes, as well as academics and staff members of the university.

“Our men were preparing this celebration with great enthusiasm. They showed a lot of creativity, and I hope that the ladies of our university have appreciated our present. Today I would like to wish all the ladies great happiness, love, success and good mood. We value the ladies of South Ural State University because they are making an indispensable contribution into the development of our university. We want them to stay healthy, happy and enjoy doing their jobs,” shared Rector of the university Aleksandr Shestakov. The event was organised in the form of a show, each act of which was impressive and spectacular, already starting from the hosts who appeared in the activity hall riding a tandem bicycle decorated with flowers. Nine bright and unexpected surprises were prepared for the SUSU ladies.

“We’ve been making such creating projects on the occasion of the International Women’s Day for five years now, so the today’s show may be considered an anniversary one. The idea of engaging only men in the festivities is not new, but this is the first such event at SUSU, and we decided to organise it as a show. Of course you need many hours of rehearsals to be able to create such a big-scale event, but people who are involved in teaching and writing research papers and doctoral theses are very pressed for time. Despite that fact the men of our university found a way to participate and prepare such a wonderful celebration to make our ladies happy,” noted Director of the Recreation Centre Svetlana Filipchuk.

The first creative present was made to the audience by the SUSU Rector, who together with a jazz band conducted by Georgy Anokhin played conga drums. The audience broke into applause and bravos. An outstanding monolog was delivered by the Director of the School of Medical Biology Vadim Tseilikman, in which he gave a funny description of the life of the university academics and a huge role of women working at SUSU.

The Chairman of the Trade Union Committee and Director of the Club of Physical Culture and Sports of SUSU Albert Aminov impressed all the ladies with his vocal talents by giving a heartfelt performance of the Verni mne muzyku (Bring Back the Music) song.

A parody of the song from Kavkazskaya plennitsa (Kidnapping, Caucasian Style) movie was made by the Dean of the Faculty of Chemistry Vyacheslav Avdin, creative director of the Mannequin Theatre Studio Vladimir Filonov and the garage supervisor Viktor Nikiforov.

Deputy Dean of the Faculty of Pre-University Education Ivan Sukhikh together with Deep Vision group performed a pop dance urging girls to love common romantic guys (as inspired by the similarly named song Lyubite, devushki, prostykh romantikov… –Girls, Give Your Love to Common Romantic Guys…). The most big-scale number was the one to the song Marusya from Ivan Vasilievich menyaet professiyu (Ivan Vasilievich Changes Profession) movie performed by the Head of Faculty of Military Education Nikolai Karpov together with the choir of the Automobile and Tractor Engineering Faculty. 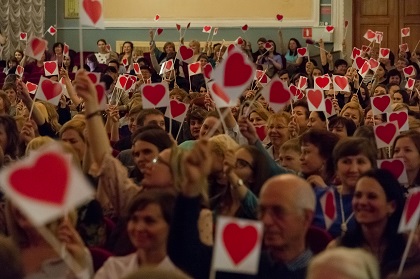 Chief research fellow of the Eurasian Studies Research and Education Centre Andrei Epimakhov together with the Uralskoe Razdolye folk dance group gave a spectacular performance of a Cossack dance with its folk charm.

The closing number was the confession made by the Director of the Institute of Architecture and Construction Dmitrii Ulrikh stating that all the SUSU girls are our Most Beloved.

Deputy Chairman of the Trade Union Committee Gennady Budanov and the Head of the Extracurricular and Discipline Work Office of the Extracurricular Activities Department Yakov Ermoshkin were entertaining the audience with their audacious jokes, they really did their best as the hosts of the event. Yakov also gave a brilliant performance of the Ryba moyey mechty (My Dream Fish) song.

The show was made for women, but the celebration could not have happened without their contribution! The hosts were engaging the ladies in dialogues! Director of the university Campus Liudmila Zadorina answered one of the questions most unexpectedly – by dancing SKIBIDI together with students, and the Director of the Institute of Natural Sciences and Mathematics Alevtina Keller sang a song.

The Head of the Extracurricular Activities Department Svetlana Yudochkina while answering one of the questions was supported by the whole audience and together they recited a chant about our university! The ladies of the university really brightened up the event by participating in it – and it did not contradict the idea of the show as all the “ladies’” numbers were performed from the audience and not on stage.

The audience expressed their high appreciation of the performance by men:

“We can only rate it with an “A” grade today, because the concert has been terrific, and we have once again seen our men as creative and smart people with great sense of humour, and these are the most important features of every man!” shared Dean of the Faculty of Journalism Liudmila Shesterkina.

“This has been a wonderful concert. We’d like to deeply thank our men for this true celebration organised for the ladies of South Ural State University. I liked all the performances, but was especially impressed by the monolog by Vadim Tseilikman and the phrase that he said: ‘A woman is an industrial partner of God’, which I think, will become proverbial,” stressed Secretary to the SUSU Council Iadviga Berezovskaia. 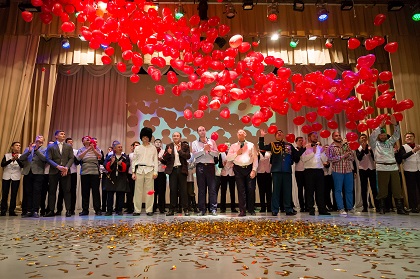 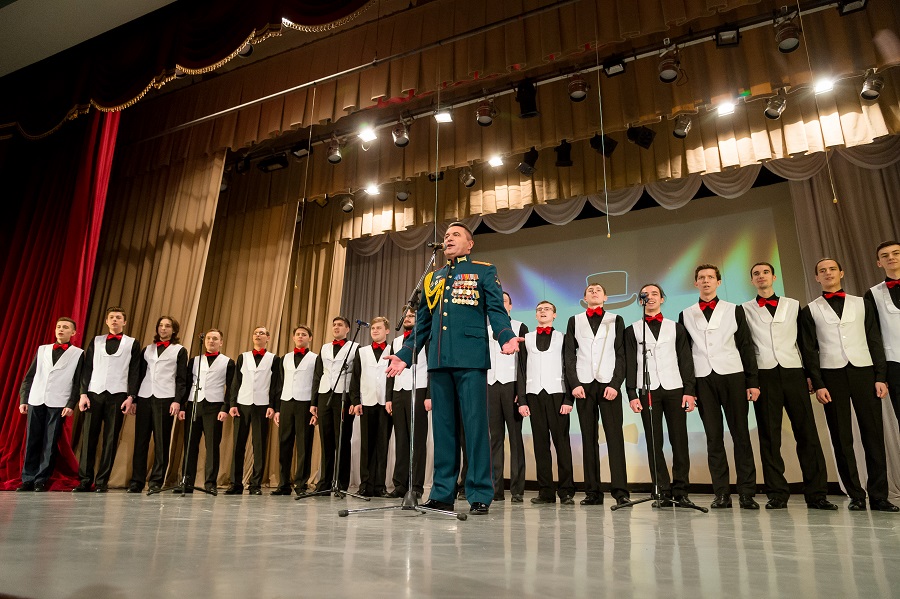 “I often attend celebrations in the form of concerts because these always bring a lot of positive emotions and long-lasting memories. I was surprised by many of the performances because it felt unusual to see such prominent degree holders in interesting costumes and impersonating different characters,” shared a second-year student Anastasiia Karimova.

The celebration closed with an exceptionally moving and beautiful grand final: with the words ‘The hearts of our men belong to YOU!’ the organisers released heart-shaped balloons into the audience!