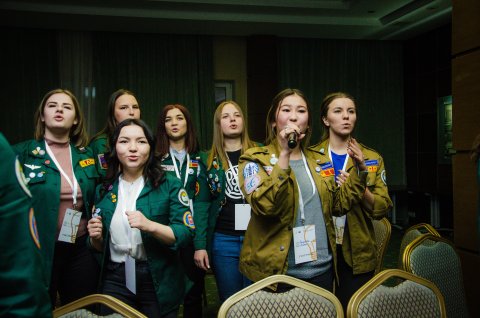 In the frames of the school, there were given lectures by Captain and Commissioner of the Magistral Open Students’ Team of Train Attendants , in the course of which the heads were reminded of the importance of motivation and leadership position, how to keep records and draw up reports. Head of Press Office of the Chelyabinsk Regional Branch of the Youth All-Russian Social Organization “The Russian Students’ Teams”, Aleksandra Novikova, demonstrated to the students the examples of what a personal brand is.

In addition, the heads had a chance to develop their own projects and make an estimate for the projects’ implementation. After that, an expert of the project activity, captain of students’ pedagogical teams of the Chelyabinsk Region, Marina Sazonova analyzed the main mistakes, focusing on the important points.

Commissioner of “Rasstoyaniye”, a Students’ Team of Train Attendants of South Ural State University, Ksenia Podymova shares her impressions of the school: “The school passed in one breath. We got a lot of useful information that will help us in further work with the candidates. The lectures were so informative that no accessive questions appeared. I liked the quest a lot; it was very unusual. Overall, the entertainment programme was great. Now we are all charged and ready to go into battle.”

In addition to the educational programme, the fighters took an unusual quest at the Chelyabinsk-Glavny Railway Station. Moreover, the school organizers prepared a “Karaoke Battle”.

It should be noted that the event was organized by the Chelyabinsk Regional Branch of the Youth All-Russian Social Organization “The Russian Students’ Teams”  supported by the Presidential Grants Foundation.