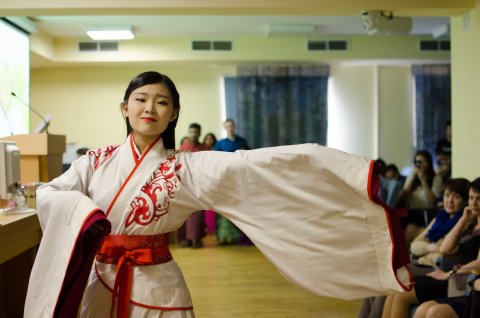 Chinese New Year is to be celebrated at South Ural State University on February 4. On the stage of SUSU Activity Hall, students from China will introduce their traditions of celebrating the main day of the year.

In Chinese culture, the New Year (Chun Jie) is translated as Spring Festival and is the most traditional and important holiday of the Celestial Empire; the holiday has been existing for more than 2 000 years. This holiday is annually celebrated at SUSU: students from China prepare artistic performances as well as perform national songs and dances, In 2019, the holiday is to be celebrated on February 5, therefore international students decided to organise the Festival on the day before.

“Relationships between Russia and China are dynamically developing, and we support promotion of Chinese culture in our country as well as we encourage students from China to get familiar with Russian traditions. Holding large-scale events dedicated to national holidays of SUSU students favours for their adaptation in the new country. For international students, such celebrations are a way to feel like home. International students in artistic manner demonstrate a part of their culture to Russian students, academics, administrative staff and the other willing, and this contributes to development of international communication at the university,” said Head of the SUSU International Office, Liudmila Lapina.

The reason that SUSU pays special attention to national holidays of the People’s Republic of China is in the fact that the number of students from China is constantly growing. Presently, there are 213 Chinese students studying at SUSU within general education programmes only (last year there were 147 of such students). Moreover, many students from China are studying at the Faculty of Pre-University Training.

This time, celebration of the Spring Festival will be even more spectacular compared to the previous years. On the stage of the Activity Hall which can sit 800 people, students from China will talk about Chinese New Year’s legend, celebratory traditions and many other things in two languages – Russian and Chinese. The celebration ceremony will feature representatives of the Rector’s Office as well as representatives of the Institute of Linguistics and International Communications. Among guests invited for the New Year celebration is the Consul General of the People's Republic of China in Yekaterinburg, Geng Liping; details of her visit are being specified. After the ceremonious part, students from China will present seven artistic performances. They will sing songs in Chinese language, including the ones in Guangdong dialect, and present national dances. Also, international students will perform with a hip-hop dance.

SUSU’s Association of International Students is taking active part in preparing to the celebration. The AIS is acting as the organiser of a number of national holidays, such as Nowruz, Arab Culture Day, Chinese New Year, the Day of Eurasian and African Culture, etc. In December of 2018, the Association celebrated its 5-year anniversary.

The celebration will take place at 14:00 in Activity Hall of the Main Building (76 Lenin prospect).