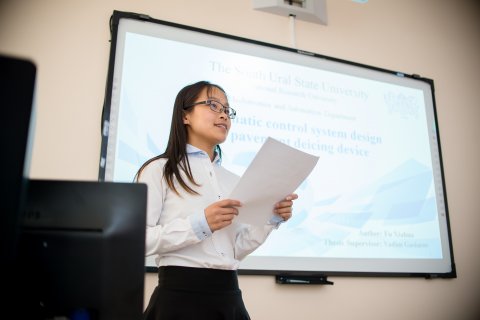 The contest on Online Courses of Russian as a Foreign Language will begin on December 21st. This pedagogical mastery contest is the final step of the advanced training programme on Creating an Online Course of Russian as a Foreign Language, which is held by the Pushkin Institute Centre of the SUSU ILIC and the Institute of Open and Distance Education.

“The students of the course were introduced to the theoretical principles of creating online courses, completed practical assignments, and will now demonstrate the fragments of online courses that they have developed which will be used in addition to in-class lessons on Russian as a Foreign Language. This is an instrument that every teacher needs. Education is becoming international, and students – mobile. Quite often we have to tailor the academic process to students who get to skip some of their classes for one reason or another. Mixed education techniques can help with this, and our course introduces students to simple but efficient instruments that should be in a modern teacher’s arsenal,” noted Elena Doronina, Associate Professor of the SUSU ILIC Department of Russian as a Foreign Language.

The students of the courses participating in the contest will be able to learn about the developments of their colleagues, discuss those, and exchange their experiences, since the main goal of the contest is developing partnerships with the teachers of Russian as a Foreign Language working in other countries.

This is an online contest held in the MOOC_SUSU system. Each project that is presented will be evaluated under certain category by three members of the contest’s committee. Links to the contest projects will be published for public online voting on the site of the partner network of the SUSU Pushkin Institute centres.

The teachers, postgraduates, and Master’s students who present their work will receive electronic certificates of participation. The winners and runners up will be awarded diplomas and prizes. The participants of the contest who earn the most votes from the online public voting will be awarded the People’s Choice prize.

As a reminder, the webinar is being held according to the Plan of Events for Supporting the Russian Language and Education in Russian. South Ural State University earned a subsidy to fulfil this plan in 2018. This work is being done under the project on Creating and Developing a Network (No Fewer than 8) of Pushkin Institute Centres at the Organisations Offering Classes in Russian in the People’s Republic of China within the frameworks of the event on Subsidies for Fulfilling Events Aimed at the Full Functioning and Development of the Russian Language, which is a sub-event of Developing Open Education in Russian and Teaching the Russian Language.