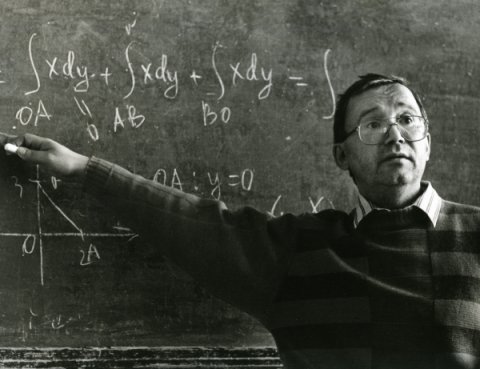 The exhibition of Sergey Novikov has opened in the Yu. Teush Photo Gallery on 8th floor of SUSU’s main building in honour of 75th anniversary of the University. Sergey Novikov is a photographer from the Ural Branch of the Russian Academy of Sciences (RAS) who has been working with SUSU (NRU) at the invitation of a corresponding member of RAS, SUSU President German Vyatkin for almost 25 years. Over the course of this period a photo album of the University’s professors has been published in the Russian photo project. The portraits of eminent scholars hang in the University Council’s Hall.

Today’s exhibition featuring portraits of SUSU professors is a unique way of congratulating the photographer on the 75th anniversary of our university. The exhibition of Sergey Novikov’s works is organised in the Photo Gallery named after Yury Teush, a graduate of Chelyabinsk Polytechnic Institute, not for the first time. Few people know that Sergey Novikov is a student of the press photographer and well-known photo artist Yury Teush. The portrait master still reverently cherishes the memory of his teacher, who used to teach photography in the Pedagogical Institute and mentored him in the Chelyabinsk Photo Club in the 1970s.

There is a black-and-white photo, academics’ portraits in the chronicle style, author’s copies (large ones will be presented to the SUSU museum) in front of you. One can get such psychologically subtle and expressive portraits after thirty years of practically daily shooting. There was no other master and memory keeper in the USSR, and still no one can be compared to him in the present-day Russia.

Probably, Sergey Novikov is the only photo artist in our country, who hasn’t been affected by digital technologies unless one counts printing processes when reproducing his 10 photo albums from the series “The Portrait of Intelligence”. The point is that the master knows that deep and rich colours of film and author print couldn’t be replaced in terms of quality by new technologies. And the colour prevents from expressing a “facial landscape” at the moment of culmination when a thought strikes the mind of scholars.