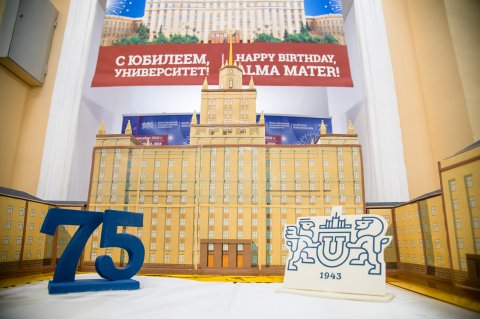 A ceremonial meeting and celebratory concert dedicated to the university’s 75th anniversary were held on December 14th in the South Ural State University conference hall.

Before the ceremonial meeting and celebratory concert, a photo zone was opened for guests, where they could take commemorative photos with the robot QUANTUM. He is unique in that he knows 75 (!) facts on the life of SUSU, so he was able to answer any question about the university. Live music was heard from the conference hall, performed by the SUSU folk orchestra.

The celebration began with a ceremonial meeting, where the governor of the Chelyabinsk region Boris Dubrovsky offered opening words.

“For all of the 75 years since its founding, SUSU has solved the most important government tasks. The many years of merit and purposefulness of this university allowed it to receive a high status. Today, this is a good springboard for career and professional growth. I want to wish the academics, postgraduate students, administrative staff, and students at the university success.”

SUSU rector Aleksandr Shestakov noted those whose contribution was vital to the development of South Ural State University.

“Today our goal is to become a truly international university. We have determined the university’s strategy. Its main direction is the digital industry. Those achievements which we have today are reached by the talent and hard work of our teaching staff.”

Within the ceremonial meeting, the university’s partners and heads offered their congratulations. Deputy of the State Duma, Vladimir Burmatov said that the history of the Chelyabinsk region is directly tied to SUSU.

“75 years is that time when you can look back and say that everything is just beginning for us. The university is making great strides: participation in the Project 5-100, opening laboratories, and much more. In my opinion, SUSU is the best university in the Ural Federal District today, it’s the future that is laid down in its students, graduates, and teaching staff who glorify our region around the world.”

The programme of the celebratory concert included new performances by ensembles from the SUSU Art Centre. The Georgiy Anokhin jazz orchestra, the Primavera choir, whose leader is Aleksey Prosekov, and the ballroom dancing ensemble of Tatiana Zenina took the stage on this day. The Deep Vision dance theatre (led by Yekaterina Galanova), the SUSU chamber orchestra of Adik Abdurakhmanov, and many others also performed. The culmination of this event was the premier of a song about the university performed by the Art Centre’s choirs and soloists. A 3D laser projection show was also given in the concert.

At the end of the event, participants were able to try the 75-kilogram celebratory cake, prepared to look like the main building of South Ural State University.

A fireworks show on the square in front of South Ural State University was the bright end to the evening.