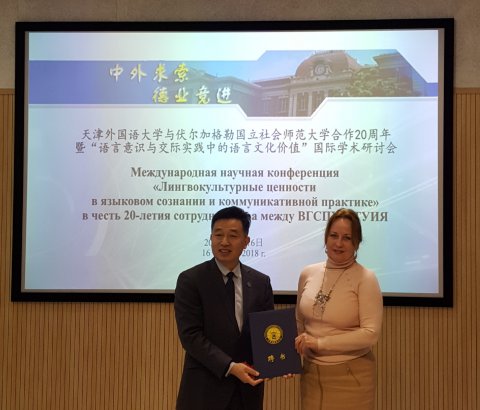 In November 2018, Tianjin Foreign Studies University hosted participants of the international scientific conference on Linguocultural Values in the Linguistic Consciousness and Communicative Practice, which was also attended by representatives of South Ural State University.

The stay of our delegation in Tianjin was marked by a momentous event ahead of the University’s 75th anniversary: Olga Turbina, Professor at the ILIC Department of Linguistics and Translation, received an honorary professor title from Tianjin Foreign Studies University. Chen Fachun, Rector of Tianjin Foreign Studies University, awarded a certificate of honorary professor to Olga Turbina. She was granted this title for a great contribution to the development of ties between TFSU and SUSU.

In May 2018, a group of ILIC lecturers and staff members under the supervision of Olga Turbina received a grant from the Russian Foundation for Basic Research for organisation of an international scientific conference entitled “Interaction of Languages and Cultures”. The SUSU partner in organising and holding this event was Tianjin Foreign Studies University. The conference was a great success and the contribution of Olga Turbina to its organisation was highly appreciated.

Olga Turbina, Doctor of Sciences (since 1996), Professor (since 2000), is a renowned Russian scientist and a specialist in the systematics of language and speech activity, historical French grammar, and syntax. She has published 89 works, including publications in the journals approved by the Higher Attestation Commission and indexed in RSCI and WOS databases.

Olga Turbina has been working at SUSU since 1997 as a director of the Linguistics Centre, which trained more than 3500 students, and since 2016 she is a professor of the Department of Linguistics and Translation. In 1998, she founded a Department of General Linguistics (held the position of a head of Department in the period from 1998 to 2016), where she developed a unique educational programme for training specialists in fundamental and applied linguistics. In 2004, Prof Turbina founded a journal of Linguistics Series in the Bulletin of South Ural State University. She still acts as the editor-in-chief of this journal, which was the third among the journals of Linguistics in the RSCI ranking.

The directorate and staff members of the Institute of Linguistics and International Communications congratulate Professor Olga Turbina on the conferral of a well-deserved title of Honorary Professor of Tianjin Foreign Studies University, and are proud of her scientific achievements and appreciation of her merits as a scientist at the federal and international levels.