SUSU Scientific Schools: 20 Years in the World of Sports Science 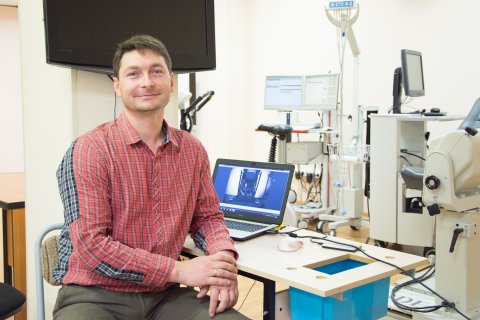 In 2018 South Ural State University celebrates its 75th Anniversary. This is also an important year for the SUSU Institute of Sport, Tourism and Service, the scientific school of which celebrates its 20 years of working.

The field of Perspective Engineering in Sports and Medicine was established in 1998, when a Faculty of Valeology, Physical Education and Sport was created at Chelyabinsk State Technical University (now SUSU). The founder of the scientific school is Aleksandr Isaev, Doctor of Sciences (Biology), Professor, Honoured Worker of Science of the Russian Federation, and Professor at the Department of Theory and Methods of Physical Culture and Sport. The research interests of Professor Isaev include adaptation of humans to extreme environments, ecological and demographical problems of the South Ural Region, as well as the issues of health promotion among preschool children and students, of modelling adaptive states of people going in for sports, personalisation of training for athletes, and other. Special attention is paid by the scientist to physiology and locomotor activity in extreme conditions with regard to both sports training and various diseases. The theoretical insights by Aleksandr Isaev have become a fundamental background for development of the scientific school. Over 70 candidate and doctor theses were defended under academic advisory of Professor Isaev.

“The following fields are being developed within the frameworks of the scientific school: Devices for Diagnostics and Correction of Biomechanics; Robotic Rehabilitation Complexes; Perspective Innovations for ECG Monitoring; as well as Methods of Improving Physical Efficiency through Using Virtual Reality. These are, first of all, aiming at creating research-and-engineering end product. The wide instrumental base available at the Institute of Sport, Tourism and Service allows to turn ideas into research, which eventually results in a prototype of a certain apparatus or device,” notes Director of the Research Centre for Sport Science Vitaly Epishev.

Over the whole period of work of the scientific school its representatives fulfilled a significant number of unique projects. Those include the systems of continuous non-contact or pseudo-contact ECG tracing. The scientists developed a technology of ECG tracing through a non-contact method using copper electrodes locating in an armchair’s casing, and through a pseudo-contact method using electrically conductive fabric and fibres sewn-in an item (T-shirt, pillow, mattress, orthopaedic equipment).

As of today prototypes of ECG tracers have been engineered, a comparative assessment is being performed of the signal quality and fidelity in an ECG T-shirt made of unique electrically conductive fabric. It is used to receive the signal, which is then transmitted to an ECG recorder via electrically conductive fibres. Also a prototype of an ECG armchair has been created (for instance, for truck drivers), which receives the signal through a non-contact method: copper plates, which are located in a specific way and are sewn-in into the casing, allow to transmit the ECG signal to the recorder. Moreover, prototypes of ECG orthopaedic equipment have been created, as well as of ECG pillows and mattresses, which can perform ECG tracing for elderly people, patients and babies while they are sleeping.

It has become possible today to register ECG on a 24-hour basis and for a long period of time, what has defined further field of fundamental research ― creating a theory on the existence of a heart rate optimal for every person within the accuracy of 1–2 beats per minute. It will be carried out jointly with scientists from Germany. Photo: Pillows for non-contact monitoring of ECG and cardiac rhythm

System for Flat Foot Diagnostics and Designing of “Smart” Insoles

SUSU has also patented the world’s first technology of producing individual corrective silicone insoles, which are currently being commercialised. Today FizioStep insoles are being sold in more than 20 cities of Russia, as well as in Kazakhstan and Kyrgyzstan. The key advantage of FizioStep is the insole material and design: silicone and lamellae do not restrict natural mobility of foot while allowing to recover the shock-absorbing function. A plus is also in the procedure of manufacture: an insole is inserted into a correcting device, a person takes a step, thus forming a foot “mould” under load. The time of production is about 20 minutes.

FizioStep is also a system for flat foot diagnostics and for assessment of disorders in biomechanics of movement: in fact a foot is assessed, as well as the degree of its influence on the injury rate and the efficiency of physical activity (of jogging, for instance). Unlike similar products, FizioStep allows not only to reduce shock load on foot, but also to treat flat foot. Moreover, today scientists are developing an insole with “smart” detectors, or a smart insole. It will be registering the foot position while walking or running, and will be transmitting data to a smartphone and correcting mistakes. Using the detectors will make it possible to perform diagnostics of and predict jumped process of knee and hip joints, changes in physiological spinal curvature, which are often the result of disorders in the biomechanics of walking and running. Eliminating pathological postures through using “smart” insoles will allow to prevent many diseases. The product will become of a means of treatment with a feedback function.

Another important project is creation of robotic rehabilitation devices featuring a function of “mirror therapy”. Already today prototypes have been engineered for upper and lower limbs. The essence of the method is the following: for instance, a patient has suffered a brain attack, after which his/her arm became paralysed. Detectors are attached to a healthy arm, and the paralysed arm is put into the device. The signals of movement from the healthy arm are transmitted to the device, which copies the movement precisely. There is also a possibility to program movements.

The uniqueness of a rehabilitation device for lower limbs is in the possibility to engage all joints in the process of recovery: hip, knee and ankle joints. The device can be used not only for rehabilitation after severe injuries, but also for teaching kids with cerebral palsy how to walk. Moreover, another field of its application may be in optimising the technique of athletes, what might lead to improving their sports results due to using innovative methods of training.

The field of Perspective Engineering in Sports and Medicine includes one more interesting project aiming at solving the problem of vocal rehabilitation after larynx removal. Today SUSU engineers made-in-Russia tracheostomae and voice prostheses, which cost considerably less than their foreign analogues. Under the project 3D models have already been created for the end-products, as well as drip-moulding forms for food silicone. Using a stereolithographic 3D printer, scientists of the SUSU Research Centre for Sport Science have created a prototype of the apparatus, which will be sent for clinical testing in Chelyabinsk Regional Centre for Oncology and Nuclear Medicine. 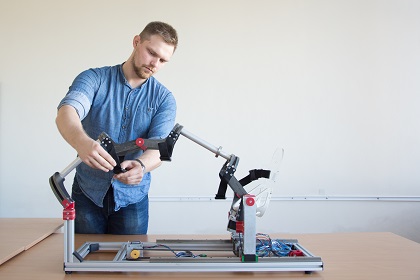 Disease Prediction by Using a Thermographic Map, and Virtual Technologies in Sports

After the SUSU Research Centre for Sport Science acquired special equipment (an infrared imaging camera creating a thermographic map of a human body, and a body composition analyser), a project started on Engineering Devices and Methods of Non-invasive Diagnostics of Human Health Based on Thermographic Parameters. Comparing a thermographic map of a human body with the data of composition analysis of the latter, as well as using the methods of mathematical analysis will allow to determine the composition through measuring the temperature in certain body parts (upper and lower limbs, and torso). The method will allow to determine the ratio of tissues in body, and whether a person is susceptible to certain diseases. Using such a device as the infrared imaging camera it is possible to detect different pathologies at early stages. 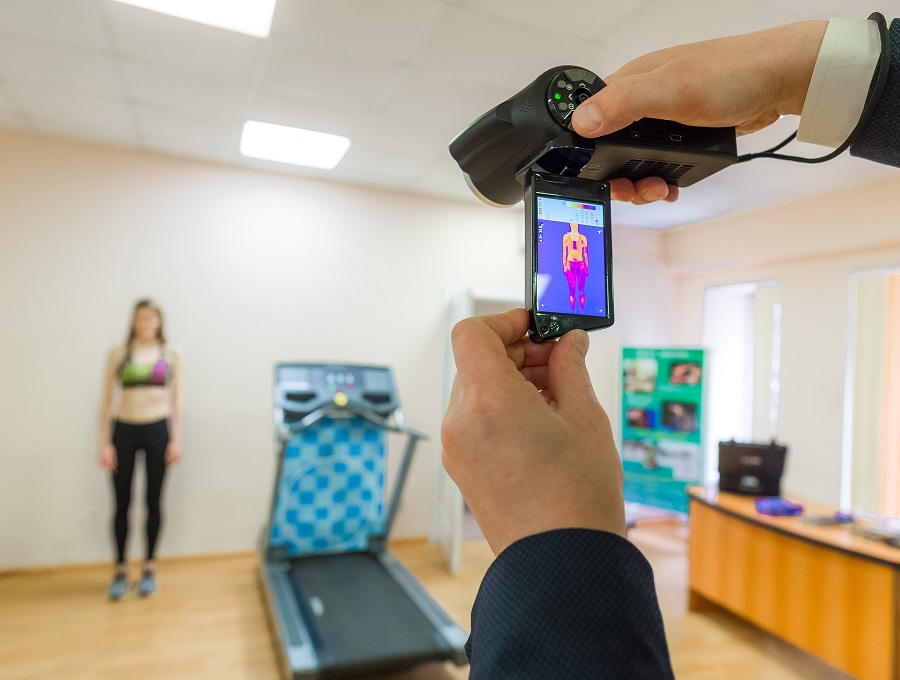 “We are also studying the interrelation between physical efficiency, maximum oxygen consumption, and the temperature in the region of chest and head. We want to answer the question: if the body temperature is an integral parameter of the metabolic rate, is it possible to measure out physical loads according to the body temperature and not the pulse rate? In case the research is successful, a device will be created, as well as a method of training using the data on body temperature,” shares Vitaly Epishev.

One of the new fields of activity of the representatives of the scientific school of the Institute of Sport, Tourism and Service is Virtual Technologies in Sports. Currently research studies are being conducted on the influence of certain visual sequences on psychofunctional state of athletes and their physical efficiency. In the future, besides engineering a model of controlling the state of athletes through using VR technologies, it is planned to localise the brain sections which may be acted upon in order to form an optimal starting state.

Over the period of functioning of the scientific school on Perspective Engineering in Sports and Medicine a significant number of unique products has been created, which can be used for diagnostics and predicting of various diseases, as well as for improving sports results; at present some new projects are being fulfilled. Today the scientific school of the Institute of Sport, Tourism and Service is successfully developing new fields of research.