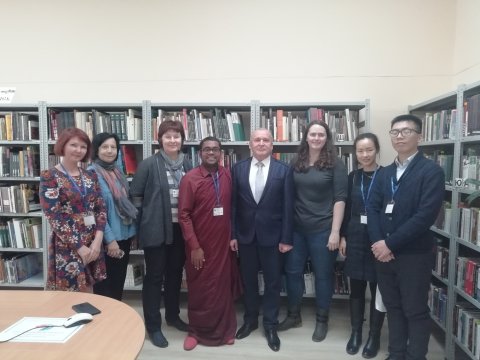 The conference programme included a presentation of the On Russia in Russian project, round tables, section and plenary sessions, advanced training courses, announcing results of international contests, and a varied cultural programme.

The postgraduate students took part in the round table on Who Is the Russian Bear? or Image of Russia in International Russian Textbooks. Amanda Wegner analysed textbooks in English and noted many inconsistencies with the image that has formed in her mind after living in Russia for 5 years. For example, the word “Siberia” is shown very often. In her opinion, the textbooks often do not reflect the full reality of Russia – the authors mention Moscow and a few large cities, but the villages that a large portion of Russians live in are barely mentioned. Worst of all, there are some textbooks in which curse words are presented as the most important Russian words. Jing Bailiang and Bai Xuhaoran talked about how Russia and Russians are presented in Chinese textbooks. Russians are presented as very friendly, hospitable, very educated, loving sports, and the most important – as good friends to the Chinese people. The image of Russia is considered both from the point of view of geography and culture (architecture, literature, ballet, paintings, etc.). The presenters noted especially that in Chinese textbooks, there are not any mistakes when describing Russia, since all textbooks are written with Russian co-authors or are peer reviewed. The funny mistakes in texts in Chinese that can be seen online are not found here in Chinese textbooks. Siri Sarana impressed all of the conference participants not only with his unusual appearance and inexhaustible friendliness, but also with his presentation on from what sources the Ceylonese learn about Russia and what they know about us. In Sri Lanka, there are only two textbooks on Russian as foreign language providing information about the grammar. The Ceylonese learn about Russian culture, first of all, from books that were translated into Singhalese and are still very popular. Siri completed an online poll about which Russian books the Ceylonese love and why. Over three days, the poll was answered 702 times. The most popular book was First Teacher by Chinghiz Aitmatov, second – Mother by Maxim Gorky. The second most popular source was the news, and third one – social networks. The news often discuss Vladimir Putin, who is very popular. Information about the army and weapons are also popular news topics. For many Ceylonese, Russia is still the Soviet Union.

All of the presentations were of great interest to the attendees. The conference participants asked questions both about how Russia is presented in textbooks and other sources, but also about what new things the postgraduate students learned in Russia. The foreign postgraduate students also participated in research discussions. They found the Grantmaking: Applying for Success masterclass helpful; there attendees discussed strategies for preparing grant applications. There was also a memorable excursion to the Boris Yeltsin Presidential Centre.

The international students told us about their experience.

Jing Bailiang: “Thank you to the conference organisers for holding this kind of event. The conference was held at a high level! I gleaned many new and interesting things. All of the topics were very interesting, and all of the presentations were interesting and helpful. I liked everything! Thank you again for this helpful event.”

Bai Xuhaoran: “I want to say thank you very much for the opportunity to attend this conference. The conference induced many genuine emotions; each presentation was filled with deep meaning and content; the topics were explored wonderfully.”

Amanda Wegner: “I was impressed by the friendly and kind atmosphere. Outside of the sessions, I felt like I had come to a meeting between friends. But during the presentation, I understood that these were very serious researchers. My colleagues discussed many interesting topics from the Russian smile to nanotechnology terms. I also really liked the cultural programme: we sang, played games, and went to the Boris Yeltsin Museum.”

Siri Sarana: “This was really a great research conference. I was very happy to take part in it with my presentation. I gained a lot of new knowledge in political linguistics and psycholinguistics thanks to my advisor Yelena Kharchenko, who suggested that I took part in this conference. Thank you to Professors Maria Voroshilova and Anatoliy Chudinov for organising this event.”