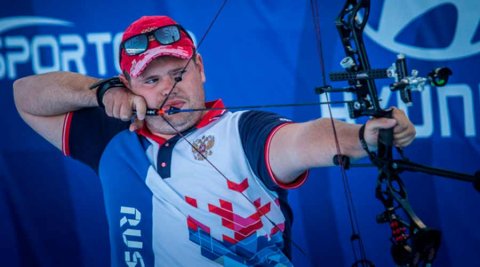 At the European Archery Championships that has wrapped up in Legnica, Poland, a student from the SUSU Institute of Sport, Tourism and Service Anton Bulaev won the gold medal.

In the finals, the Russian athlete outperformed an Italian Sergio Pagni with the score of 147:145. Bronze medal was taken by another representative of Italy, Federico Pagnoni. Russian archers took the total of three prizes in this tournament.

“Already at the starting point it was clear that Anton was in great shape and would be one of the favourites to win medals. Anton performed just as well in the final round. Being a confident winner of every match, the Russian athlete reached the finals determined to win over the highly experienced Italian Sergio Pagni, and did it. It is worth mentioning that the competition was indeed extremely high in the blocks division of the European Championships, since such high-profile and world-class archers as Mike Schloesser, Stephan Hansen, the very same Sergio Pagni, and many others participated in the tournament,” as quoted from the statement of the Russian Archery Federation.

Besides Anton Bulaev, men’s team of classic archers also took gold. In the finals, our athletes outperformed the team from Italy with the score of 5:4. Bronze medal was awarded to the mixed team. In the third place play-off, the victory was held over the team from Turkey.