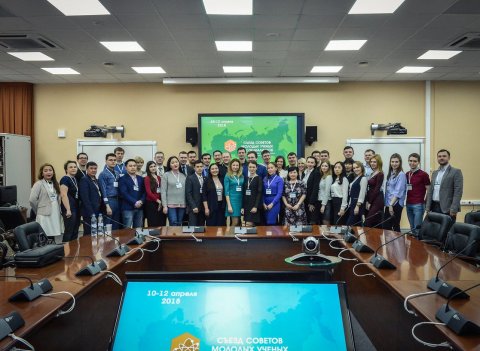 From 10th through 12th of April, a Congress of the Council of Young Researchers and Specialists of the Ural, Siberian and Far Eastern Federal Districts was held in Krasnoyarsk.

Researchers and specialists from more than 15 regions of Russia took part in the Congress. South Ural State University’s Council of Young Scientists was represented by Alisa Maltseva, Associate Professor of the Department of Developmental Psychology and Age Related Counseling.

One of prioritized activity areas of the Council of Young Researchers and Specialists is development of interregional cooperation and creation of a common information space which would provide the possibility to obtain up-to-date information about scientific, scientific and popular, and innovative events, and to get access to high-tech equipment of various laboratories, including international ones, and an access to grant and other contests intended for young researchers.

“A huge step towards integration and cooperation of Young Researchers Councils of various levels was made at the Congress. What is important, we learned about one another and about our research areas as well as about the unique experience of each Council. In the nearest future we are planning on creating a common information platform where each Council will be able to get up-to-date information about upcoming events and participate in them, and meanwhile invite for cooperation on the one hand and share their experience on the other hand,” noted Alisa Maltseva.

“Egor Sergeevich shared his many-years experience in the sphere of popularization of science and scientific communication, organizing such scientific-and-popular events as, for example, the Scientific Fights contest. Moreover, many various formats of scientific communication were introduced by Director of the Information Center for Atomic Energy in Krasnoyarsk, Eduard Raspopov. It was very useful and inspiring! We are moving in the right direction by organizing Scintific Fights at SUSU. Of course it is difficult to start something new and unfamiliar to the others. The most important thing is to keep the faith, stay positive, and keep moving forward! By the way, the second round of the Scientific Fights is to take place at the Boiling Point on May 10,” said Alisa Maltseva.

In order to popularize scientific activity, the Foundations that provide support for research projects are advised to include scientific-and-popular presentation of project implementation results as one of the requirements.

By the results of the Congress, an agreement on cooperation of the Councils of Young Researchers and Specialists working at the territory of the Russian Federation was signed in order to provide mutually beneficial cooperation in educational, research and development, and innovative activities.

As a reminder, the main goal of the Congress of the Young Researchers Councils is exchange of experience of project implementation in various fields of research, as well as establishment of interregional contacts, forming joint projects and providing recommendations for further network cooperation of the Councils of Young Researchers and Specialists of the Ural, Siberian and Far Eastern Federal Districts.