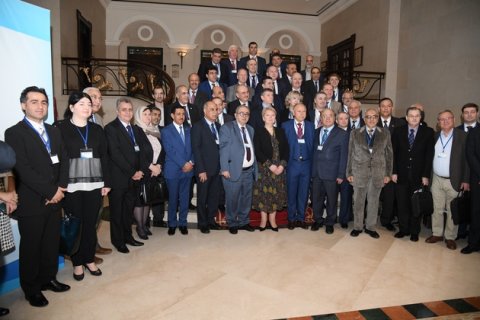 On February 19, the First Forum of the Federation of Russian and Arab Universities started its work in Beirut (Lebanon). The Minister of Education and Science of the Russian Federation, Olga Vasilyeva, made a speech during the ceremonious opening of the Forum.

In her welcoming speech, the Minister emphasized that the Forum is an important event for development of educational and scientific cooperation between Russia and countries of the Arab world.

“In our country, we highly estimate the big contribution to the world science made by Arab scientists, who had been working back in the eon of early Middle Ages in various universities and libraries at the territory of modern Egypt, Iraq, Lebanon, Morocco and Syria. I would like to specially note that it is only thanks to them the artistic legacy of the great antique school, which has become a common property of the global civilization, could be preserved and passed to the following generations,” said Olga Yuryevna.

The Head of the Ministry of Education and Science of the Russian federation noted that “the most important tool for cooperation in the sphere of education at intergovernmental level is the quota limit of governmental scholarships determined by the Government of the Russian Federation for study of foreign citizens in educational institutions of Russia at the expense of the federal budget.” According to the Minister, “among the traditional partners from the Middle East in this form of partnership are Syria, Palestine, Iraq and Jordan.”

“According to the plan of foreign citizens admission for studying in Russian educational institutions in 2017/2018 academic year, 1259 people from 16 countries of the Arab world were admitted within the quota. At the same time, 4205 citizens from 19 Arab countries got admitted for paid education in Russian universities,” said the Minister.

Olga Vasilyeva specified that in total, in the current academic year, there are 11982 students from countries of the Arab world studying in Russian universities; among them 2127 are studying at the expense of the federal budget, and 9855 are studying upon agreements on education at the expense of natural and legal bodies.

“At the present time, Arab countries are placed the 3rd after the CIS countries and Asia by the number of students, obtaining education in Russian educational institutions; their share is about 10 percents from the total number of international students,” summarized O.Yu. Vasilyeva.

Among top-priority goals for activation of traditional educational and scientific connections between Russian and Arab universities the Minister named solving of the issue on mutual acceptance of education, qualifications and academic degrees.

“For this goal, Russian party considers it necessary to start counseling the representatives of relevant Ministries at the expert level in order to elaborate projects of corresponding intergovernmental agreements,” said Head of the Ministry of Education and Science of the Russian Federation.

Within the Forum, a panel discussion entitled “Strengthening of academic cooperation between higher education institutions of Russia and Arab countries” and a General Assembly of the Forum were held. The events were held by The President of the Russian Union of Rectors, Rector of the Lomonosov Moscow State University, Academician Victor Sadovnichy and Secretary General of the Association of Arab Universities, Sultan Abu Orabi.

Participants of the Forum discussed cooperation in the sphere of education, science and technology, including joint research, academic mobility, popularization of Russian language in Arab countries, and studying of Arabic language in Russian universities.

During her visit to Lebanon, the Minister visited the Lebanese University and met with its President, Fouad Ayoub, who is a graduate of a Russian university; the Minister also took part in the ceremony of opening an International School in Beqaa Valley, in which students of grades 1-8 are studying Russian language.

“At the present time, there are 225 students and postgraduates from Iraq, Yemen, Sudan, Jordan, Egypt, Algeria, Morocco and Syria studying at South Ural State University. Among them, 41 are studying on bachelor’s degree programs; 68 – on master’s degree programs; 32 people are postgraduate students; and 84 are attendees of pre-university courses. Students from Iraq hold the 1st place by the number of SUSU students; students from Egypt are placed the second. The university has experience of training scientific personnel within postgraduate studies. In 2004, the first admission for postgraduate studies at the Faculty of Power Engineering took place for 2 Algerian citizens, who in 2006 successfully defended candidate dissertations on the specialty of Power Electronics. Since 2011, 116 foreign citizens has undertaken postgraduate studies; among them, 48 students are from Iraq, Yemen, Sri Lanka, and Algeria,” noted Alexander Shestakov.

Based on the materials from минобрнауки.рф