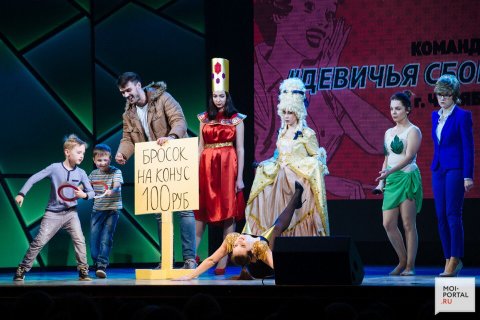 Two KVN (Club of the Funny and Inventive People) teams from Chelyabinsk got selected to television leagues broadcasted on Channel One. They performed at the 29th International KiViN-2018 festival in Sochi which finished on January 17. Chelyabinsk was represented in Sochi by 7 teams; especially successful was Teatr Uralskogo Zritelya (Theatre of Ural Audience) which was invited to the Major League of the KVN International Union. SUSU Girls’ Team made it to the Premier-League.

“The Festival in Sochi is the most important, the most popular and the most impressive event of a year for the entire International Union of KVN. This is the start of a season for any team, no matter its achievements. That is why hundreds of teams from all over Russia, from near-abroad and sometimes even far-abroad countries each year come to the Festival. For our guys, this is not just a perfect possibility to come into the spotlight but also a chance to get new knowledge and experience,” said Deputy Minister of Education and Science of the Chelyabinsk region, Vadim Bobrovskiy.

Games of the Major and Premier Leagues will be broadcasted at the federal TV channel in February-April. Besides, Teatr Uralskogo Zritelya will perform at a gala-concert of the KiViN-2018 Festival.