Chamber Choir of the Chelyabinsk Philharmonic Hall Performed at SUSU 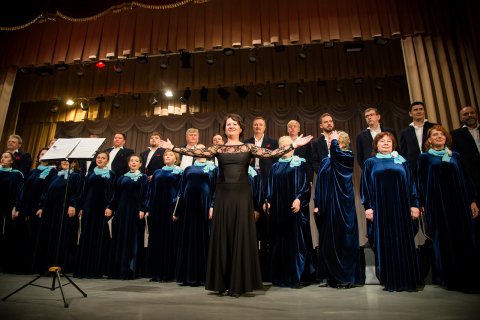 On December 5, one of the best music teams of Southern Ural – the Chamber Choir of the Chelyabinsk Philharmonic Hall – performed at South Ural State University. On the stage of SUSU’s Activity Hall, the artists performed loved-by-all songs from Soviet’s movies, popular compositions of The Beatles and Queen, American spiritual and Russian Folk songs. The Choir’s artistic director and chief conductor, Olga Selezneva, told us why she chose this repertoire to be performed at SUSU.

“Today we decided to sing merry songs which can raise people's spirits. Our repertoire includes many programs among which we chose the most appropriate one.This program consists of songs of various genres.” 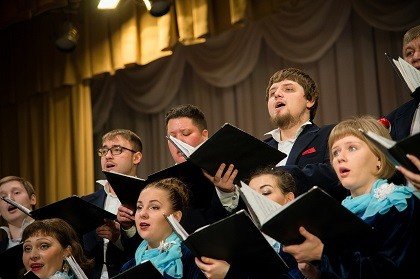 “When giving performances on tours around various cities and countries, we surely regard language peculiarities of audience. We always try to perform a song in the country’s mother tongue. Secondly, classic compositions will always be popular, and people listening to classical music natively have a good taste in music. And thirdly, what is performed with feeling always gets accepted well, no matter the country and the language.”

Student of the Institute of Social Sciences and Humanities Uvindu Vijeveera has never been to such events before. The student came to study at SUSU from Sri Lanka, and listening to the world’s classic performed by the Chamber Choir of the Chelyabinsk Philharmonic Hall, according to him, was a big joy.

“I am so happy to be here, because for me, as for an international student, this event was something new, and I got only the best impressions. I think they sang not just for us to listen, but also for us to feel these songs with our hearts. I liked a lot when they played various music instrument along with clapping and stamping their feet – by doing that, they created different soundings of songs.” 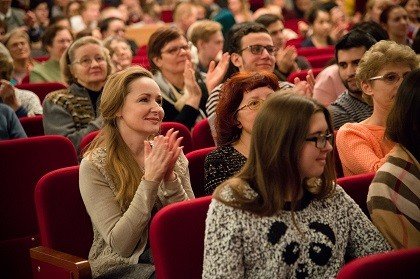 The Chamber Choir named after Valeriy Mikhalchenko is a choir with big history. It started from the Choir’s establishment in 1974; back then the Choir was totally self-employed. A big role in the Choir’s history played its first choragus, Valeriy Mikhalchenko. Under his supervision, professional level of the Choir increased gradually and by the year of 1989 the Choir was invited for performing at the Philharmonic Hall as a professional music team. In 2014, the Choir was named after him. The team more than once became prize holder of all-Soviet and republic-wide festivals and contests, and performed in many cities in Russia and abroad.