I Came to the Instrumentation Engineering Faculty Without Any Doubts: SUSU Graduate Dmitriy Iosifov 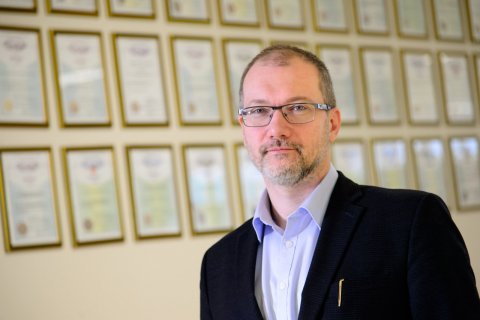 Director of the AO PG Metran Global Engineering Center, Dmitriy Iosifov, is a graduate of the Instrumentation Engineering Faculty’s Department of Automated Control Systems. He told us about what qualities he obtained while studying at SUSU and how his career evolved after his graduation.

− How did you get enrolled at SUSU?

− Studying at SUSU was a family tradition: my sister by that time had been studying on the specialty of Robotic Systems and Complexes, and my father taught at the Department of Metal Treatment under Pressure, and supervised the Department’s branch at the ChTPZ. I came to the Instrumentation Engineering Faculties without any doubts. My specialty, Automation of Production Processes and Manufactures, seemed interesting; I wanted to learn how to organize operation processes of a large enterprise without personnel’s participation.

− What qualities did you obtain at SUSU?

− To me, the Instrumentation Engineering Faculty became a good school regarding not only the engineering knowledge that I obtained, but also the understanding of life, making decisions and planning. I think that I learned to be more responsible for the deeds I do. Generally, my education consisted of 2 parts: the first one was higher education, and the second one was postgraduate study which I undertook at the Department of Informational and Measuring Technology. This work was multisided and interesting; it made me realize that the most interesting discoveries and achievements take place at the intersection of different sciences. If a person has detailed knowledge in some area, he’s got every chance to improve this knowledge in one sphere. But if the person sees problems arising at the intersection of different sciences, he has a chance to create a new area, and with this area boost the knowledge of the entire humanity.

− How did you find yourself at the AO PG Metran?

− Initially, we were conducting a research work between the Department of Informational and Measuring Technology and Metran, in which I took part as an executor. After that, I was offered the position as a senior engineer in a group of communication technologies where we performed development of functional equipment intended for setting of measuring devices. After awhile, I got transferred to the position as a Project Supervisor in the sphere of Pressure, and nowadays, the Global Engineering Center, which I supervise, performs development in three main areas: devices for measuring pressure, temperature, and consumption.

− What would you like to wish for the School of Electrical Engineering and Computer Science on the occasion of the anniversary?