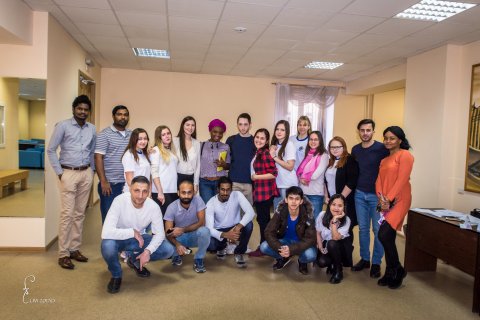 On November 20, 2017 the second and final information day for the first-year foreign students and those studying Russian was held at Sigma Conference Hall. The event was hosted by the Head of the International Affairs DivisionOlga Yaroshenko. The information day was organized in five languages: Arabic, Chinese, English, French and Russian. Over 100 people from different countries took part in this event.

To help foreign citizens better adapt to life in Russia and studying in the Russian university, a Center for Sociocultural Adaptation managed by Elena Doronina was established at SUSU in 2016, and is still functioning. The Center offers participating in a Conversation Club, organizes excursions, meetings and events, as well as has organized CreaTEAvity project (dancing, playing guitar, drawing, origami and other creative groups). Dina Valeeva, the Head of the Center for Sociocultural Adaptation told about their work. Also, the President of the Association of International Students Alina Pavlyuk together with AIS members Uvindu Wijeweera and Zhi Jin described the activities of this Association managed by the Head of the Extracurricular Activities Department Ekaterina Yurovskaya. Students learned which celebrations will be held for foreign students this year. And everyone was also invited to the Cooking Festival to be held November 24, 2017.

Moreover, Director of the University Campus Lyudmila Zadorina told about the rules of accommodation in the dormitories.

Students were provided with up-to-date information on the issues of migration legislation directly by the Head of the Department of Migration Service for Foreign Citizens Marina Davydova and Deputy Head of the Permits and Visas Department, Major of the Police Force at the Russian Federation Main Directorate of the Ministry of Interior for the Chelyabinsk Region Maria Kolkotina. Explanations were given regarding the rules of stay for foreign citizens of visa countries, as well as regarding liabilities for the migration law violations.

We would like to thank the interpreters who took part in this event: Ahmed Al Haddad, Fangbing Liu, Semen Gamm, and Zhi Jin.