SUSU Professor Awarded by the Parisian Club of the Audacious 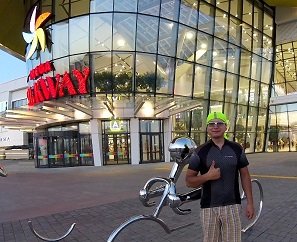 Sergey Syaskov has traveled on his bicycle a distance equal to a trip from Chelyabinsk to Vladivostok.

A SUSU Professor and a bicycle rider from the Continent Club Sergey Syaskov was awarded a title of a super-long-distance cyclist by Audax Club Parisien – “Parisian Club of the Audacious”. This season, in particular, he cycled the route along the Siberian Chuya Highway (or Chuysky Trakt, listed among the top five most picturesque landscapes of the world); and the last year resulted in his third place among the long-distance cyclists of Russia, since he cycled 6,700 kilometers during the season.

“This year I’m planning to be among the top three again,” says Sergey Syaskov. “I have cycled the route equal to the distance from Chelyabinsk to Vladivostok. If you count all the elevations, that would be like I’ve climbed the height of seven mounts Everest, and if you sum all the slopes that I’ve descended, that would equal six Mariana Trenches. And if you calculate the total travel time, you could watch Santa Barbara TV series thrice over that period of time.”

In 2016 our cyclist was awarded titles by the Parisian Club three times! 13 other residents of Chelyabinsk were also awarded their titles, and the Continent Club took the fifth place among the Russian cycling clubs. This is a great achievement if we consider that 41 clubs are currently active under the authority of Audax Club Parisien.

How do you get a super-long-distance cyclist title? The rules are the same for men and women: long-distance cyclists need to reach check marks in certain time, register their results and send protocols over to Paris. The timing of each marathon depends on its distance, for instance: 200 km – 13:30, 600 km – 40:00, 1,000 km – 75:00. The routes normally run along the most picturesque landscapes since unchanging landscapes, like that of steppe for instance, can be depressing for human psyche.

The Chelyabinsk club enjoys a possibility to plot routes in the Ural mountains featuring unique elevations, in particular through such mountain ranges as Malyi Yamantau and Zilmerdak (“The One Who Can Stop Wind”). The Club’s history includes special cycling rides which got their romantic names afterwards: “White” ride, when cyclists had to cover 200 kilometers under the March snowfall; “Cute” ride, when the cyclists traveled 300 kilometers accompanied by girls; “Starry” ride, which was held at night; or “Tough” ride, when the cyclists had to climb a 2,255 meters elevation.