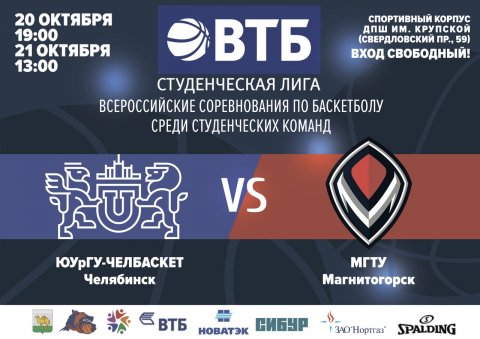 Chelyabinsk student basketball team made up of the members of the best student team in our city (according to the last season’s results), the SUSU team, starts the new season in VTB United Students League in a South Ural derby versus the “Hearts of Steel” team of Nosov Magnitogorsk State Technical University.

In the 2017/2018 season the strongest teams of Moscow, Kaliningrad, Kazan, Belgorod, Yekaterinburg, Tyumen, Kirov, Orel, Krasnodar, Samara, Rostov, Ukhta, Malakhovka, Chelyabinsk and Magnitogorsk will be participating in VTB United Students League. The athletes will see an event-packed game season which will close with the Final Eight Tournament of VTB United Students League followed by the all-Russian playoff, Belov League of the Student Basketball Association.

SUSU Chelbasket Team is a Chelyabinsk student team, a joint project within the framework of collaboration of the Municipal Autonomous Institution Basketball Club “Chelbasket” and South Ural State University aiming at joint development of physical education and sports in Chelyabinsk, as well as of student associations, and which provides an opportunity for young talented athletes to prove themselves at high-status competitions.