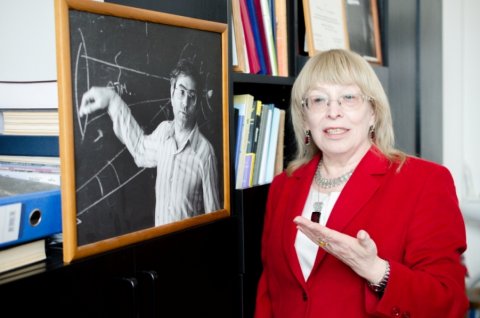 In the June edition of the international scientific journal Optics & Photonics News , they named the new honorary members of the Optical Society of America. Among them – Natalya Kundikova, dean of the Faculty of Physics, head of the Department of Optoinformatics of the SUSU Institute of Natural Sciences..

She was awarded the title of honored member of the society for her huge number of published works in international journals with a high impact factor which are included in the Scopus and Web of Science databases.

Natalya Dmitrievna already has around 197 scientific publications, she has been awarded the prestigious Galileo Galilei medal from the International Commission for Optics.

Natalya Kundikova and Yakov Borisovich Zeldovich were the discoverers of one of the modern areas of physics in the distribution of light. You can read more about their discovery  on our site.

Members of the OSA valued not just her publication activity but also her work in the International Commission for Optics, as well as the huge number of young candidates of science that have achieved success under Natalya Kundikova's wing.

Natalya Dmitrievna herself smiles humbly and says that the most important thing to her is not recognition on an international level, but spreading knowledge about optics and the chance to interest students.

We'd like to add that the Optical Society of America (OSA) is one of the four most influential international societies in optics and spectroscopy. It is only possible to become an honored member of this society after a significant contribution to international science.