“I am Happy to Note that SUSU is Reaching the Goals it has Set”: Doctor Ron de Kloet Talks about the University’s Progress in the International Arena 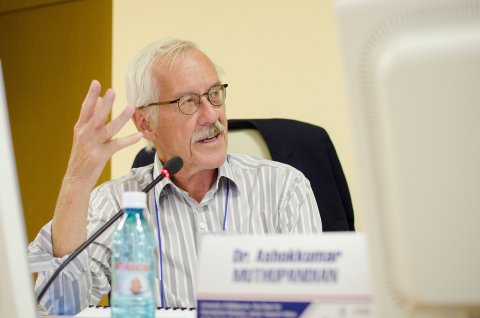 As part of the International Research Council (IRC) that was held at South Ural State University June 12th through 14th, the university was visited by researcher from Leiden University, professor of the Royal Netherlands Academy of Art and Science, Doctor Ron De Cloet, who is famous in the international research community for his discoveries in the study of the effects of stress on the brain. He told the university press service about his research, his participation in the IRC, and SUSU’s prospects in the international scientific arena.

– You study the effects of stress on the brain. If you could articulate your research in one sentence, how would you say it?

– I can articulate it in a very short sentence, and in a longer one. The effects of stress, coping, and adaptation are the most important discoveries of my research. It’s one thing to research and another to apply research to humans, to life, to the prevention and fight with illnesses, or to return peoples’ health to them. Under illnesses I mean depression, brain disorders, and also psychosis and emotional and professional burnout. Understanding how the stress hormones function helps us fight with illnesses caused by stress.

– In their book “Thinking, Fast and Slow,” Amos Tversky and Daniel Kahneman reveal the concept of cognitive distortions, which occur in people as a result of them creating their own subjective “social reality,” according to their perception. What do you think, how do cognitive distortions affect the stress levels that people are subject to?

–  The conclusions of our research can be extrapolated to the research of Daniel Kahneman. “Thinking fast” means returning to your habits, and “thinking slow” relates to thoughtful reflection, when you chew the end of your pencil before making a decision. That is, we are talking about the difference between “thinking” and “doing”. When a person is under stress, he is located at a crossroads between returning to his habits or appealing to higher brain functions, the hippocampus. We found that the stress hormone can affect the brain in two ways. When a person is in a new situation, he begins to evaluate it. The stress hormone can force the person to behave in the way that he is used to, respond quickly – this is necessary, for example, for police officers and firefighters. In emergencies, these kinds of specialists must act quickly. But there is also the opposite side. Under stress, people begun eating chips or drinking alcohol to relieve stress. In other words, people resort to bad habits to free themselves from the feeling of stress. Bad habits lead to obesity, health issues, and depression. I think that we have found the key to understanding the stress hormone and we will be able to help people control these habits which can, at times, have devastating consequences.

“Think slow” is the hippocampus’ task. It is responsible for evaluation, thought, and collaboration. Slow thinking is very helpful when you have time for it. However, if you do not have enough time, you must act quickly and return to your previous experiences. Daniel Kahneman has written an excellent book. I am commenting on only a small portion of it. There are many examples given in the book which don’t relate to the mechanism that I’m studying but are taken from observations. The human mind is infinitely more complex than how they described it. My position is as follows: “I’m not stating that I understand it completely. This topic is interesting, and we are working on it.”

– Tell us about the most interesting, in your opinion, scientific discoveries about stress from the last few years.

– There were a number of breakthroughs made, but I’ll touch on two. The first of them is a technological one. Today, it’s become possible to activate concrete genes in the neuron using light, activating the whole neuron and studying its activity. That is, we can gain an idea of how one, concrete neuron functions. The brain has 10 billion neurons, so we have a lot of work ahead of us. However, the possibility of studying the activity of one neuron is already a huge achievement. By stimulating one neuron in particular, we can force an animal to behave like we want: drink, eat, move. In terms of illness, there have also been some discoveries. But for me, the conceptual breakthrough is important. It’s important to understand that discussion about stress affects the whole body. Discussion about the hormones and nervous system affects the signals which coordinate all of the processes that occur in the body and mind, including muscles, vision, perception, evaluation, and reaction. In discussing hormones, we must remember their secretion in blood. They reach the brain and nerve cells, making their impact on emotions and cognitive abilities. The hippocampus, a region of the brain, is responsible for the formation and storage of emotions. This is the place where stress hormones are stored. Emotions are stored in our memories, once again originating in the proper context.

– You are a member of the IRC. Tell us about the positive changes in SUSU which have occurred throughout your partnership? What does the university need to work on still?

– This is an excellent question, the answer to which lies in the university’s development. Before my arrival in Chelyabinsk, I only knew about this city in relation to the meteor and professor Vadim Tseylikman. In Chelyabinsk, I saw the great SUSU building and I met the rector, who surprised me. We began to judge the university, not knowing what awaits this university or its goals. At the second meeting with the SUSU leadership, we clearly defined the goals and needs. The people responsible for making important decisions for the university – that is, the government, society, and manufacturing companies, can get a clear understanding about the university’s development. The ability to make achieve your wishes and needs is a huge achievement. We saw great progress in the university’s development for the last nine months. I hope that next time I will be able to share some concrete examples of progress at the university. I am happy to make my contribution and I believe that this will be a very positive experience for both SUSU and for myself.

– How do modern researchers see SUSU? How can the university attract researchers to cooperation and earn the trust of the international scientific community?

– I think that SUSU is on the right path. SUSU needs to talk about itself, work, and attract the regional leadership so that people associate themselves with the university and feel some excitement from the fact that they are part of the university. Success in the international arena is not achieved by all people but by just a few champions, who need to move forward. From 100 people, maybe 5 of them who will open the university up to the world and then show off the other people in the university who are dedicated in their work and are working hard. In this case, I can talk about proper work distribution. If SUSU has a good reputation in teaching, students will come. This happens with time, and is not achieved in one year. This doesn’t happen in five years, even. So, it’s necessary to create a big group of ringleaders for this – pioneers, who will move it forward. This doesn’t just relate to South Ural State University but universities of all cities and countries – in the USA or the Netherlands. This mechanism is necessary everywhere.

– Tell us about your partnership with SUSU and your future projects.

– I found out about your university thanks to the School of Medical Biology professor Vadim Tseylikman. One day he attended a congress that was held in the Netherlands. We chatted, and then started exchanging messages. After a few years, we had the chance to work together. He asked me, would I agree to become a member of the International Research Council (IRC) and I agreed happily. Our first visit as members of the IRC was in October of last year. During the visit we got to know the ambitious plans for SUSU’s development. 9 months later, I can say that these plans have come true. SUSU was able to achieve the goals set in October. This meeting is very productive, we were able to mark out the future arc of development for SUSU to become the leading university in the region and take its place among the 100 best universities in the world in the next 10 years. I am very happy to make a contribution to achieving this goal.