The First Meeting Between Philosophy and Theatre Held 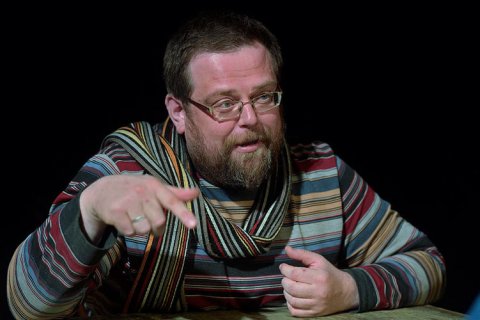 On June 2nd 2017 a round table was held entitled “Philosophy+Theatre”, the topic of which was discussion of the philosophical ideas of the play by the New Artistic Theater based on the novel by F.M. Dostoyevsky, Demons.

The head of the round table was associate professor of the Department of Philosophy Svetlana Petrovna Reshikova. Her deep questions set the tone for all of the rest of the discussion brought up by the student audience. Participants of the round table included artistic director of the NAT, director of the play, staging director Evgeniy Mikhailovich Gelfond, NAT actors Kseniya Boyko, Konstantin Talan, and Aleksandr Mayer, and also director of the ISSH Elena Vladimirovna Ponomareva, head of the Department of Philosophy Elena Vasilevna Grednovskaya, and senior professor of the Department of Philosophy Ulyana Vladimirovna Sidorovna. Participants and students who had attended the play and who had responded to it on the NAT VK page participated in direct discussion. The audience also included teachers and students of SUSU who actively joined the dialogue.

This meeting of teacher and student with actors, off stage, and in a special creative space of a round table, received huge response from the audience. Two hours of lively, emotional dialog were dedicated to discussion of both the questions proposed in advance about the play and the desire to understand the peculiarities of comprehending philosophical ideas in a theatrical workshop.

Students, teachers, and the theatre who joined together in this event for cultural communication showed that dialog among various discourses is possible, fruitful, interesting, and promising. All of the members of the round table were for the future development of the “Philosophy+Theatre” project.