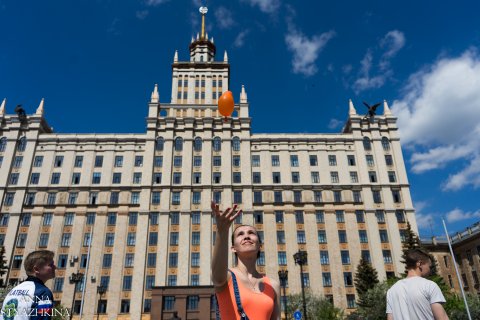 Sport is one of the most important aspects of our life. Staying fit is the right way to health and development.

South Ural State University provides an opportunity to plunge into the world of sports for all who wants to: annually at the parking lot in front of the main building the Sports Festival is held. This year, in the framework of the sport’s week the event was held on May 26.

For the participants, five sport grounds were organized: for streetball, flatball, archery tag, slacklining and even for checkers tournament.

In street basketball, or streetball, teams of both girls and boys competed. The teams mainly consisted of university and high school students.

“This is the first time I take part in the Festival; me and my friends, who told me about the event, decided to try ourselves. Our team was well-prepared, but we only took the second place. We will surely participate in the next year’s event!” student of one of the city’s high schools Darya Danko shared her impressions.

Everybody knows the paintball game, in which weapons loaded with balls with paint are used. The updated version of the game at the Festival became archery tag. Bows were used as weapons, and arrows with puffy tips were used as cartridge. 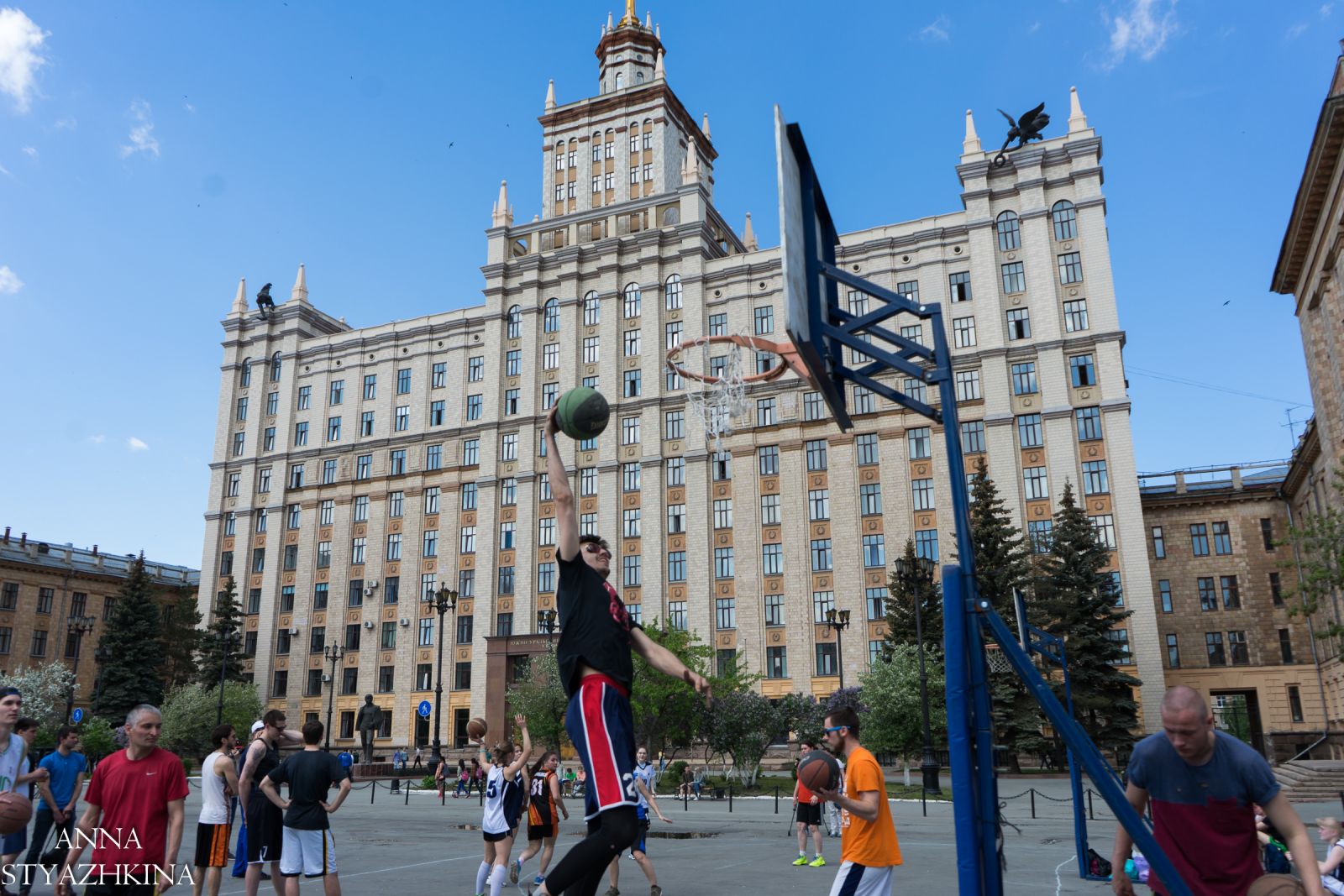 Attention of the participants was also drawn by slacklining. This kind of sports involves walking and performing different tricks on stretched nylon or polyester slings which are fixed between “stations”.

“The movement originated in the 80-es in America. Two students started balancing on chains bordering a parking lot in order to entertain themselves. This drew the attention of rock climbers, and then slacklining completely became a sport. In Russia it has existed for about 8 years, I’ve been practicing it for 4 years already. It just so happened that I found out about slacklining during my first year of studying at the university, in the frameworks of this Festival,” told us Vyacheslav Kurpatov, a SUSU student who professionally practices slacklining.

The becoming popular sport, flatball was presented at the center of the general sportsground. This sport is an alternative to football. At the same time, there is a noticeable difference: the size of the play ground is 5 by 3 meters, the ball is small, and only two people can play the game, competing against each other.

“It is quite hard to put together a completed football team, besides, constant practicing is necessary. But here it is not obligatory, all you need to have is desire to play. I have already played flatball before. Today I would like to compete for the SUSU team,” says Andrey, one of the participants, who is a member of the SUSU’s Sporting and Mass Committee. 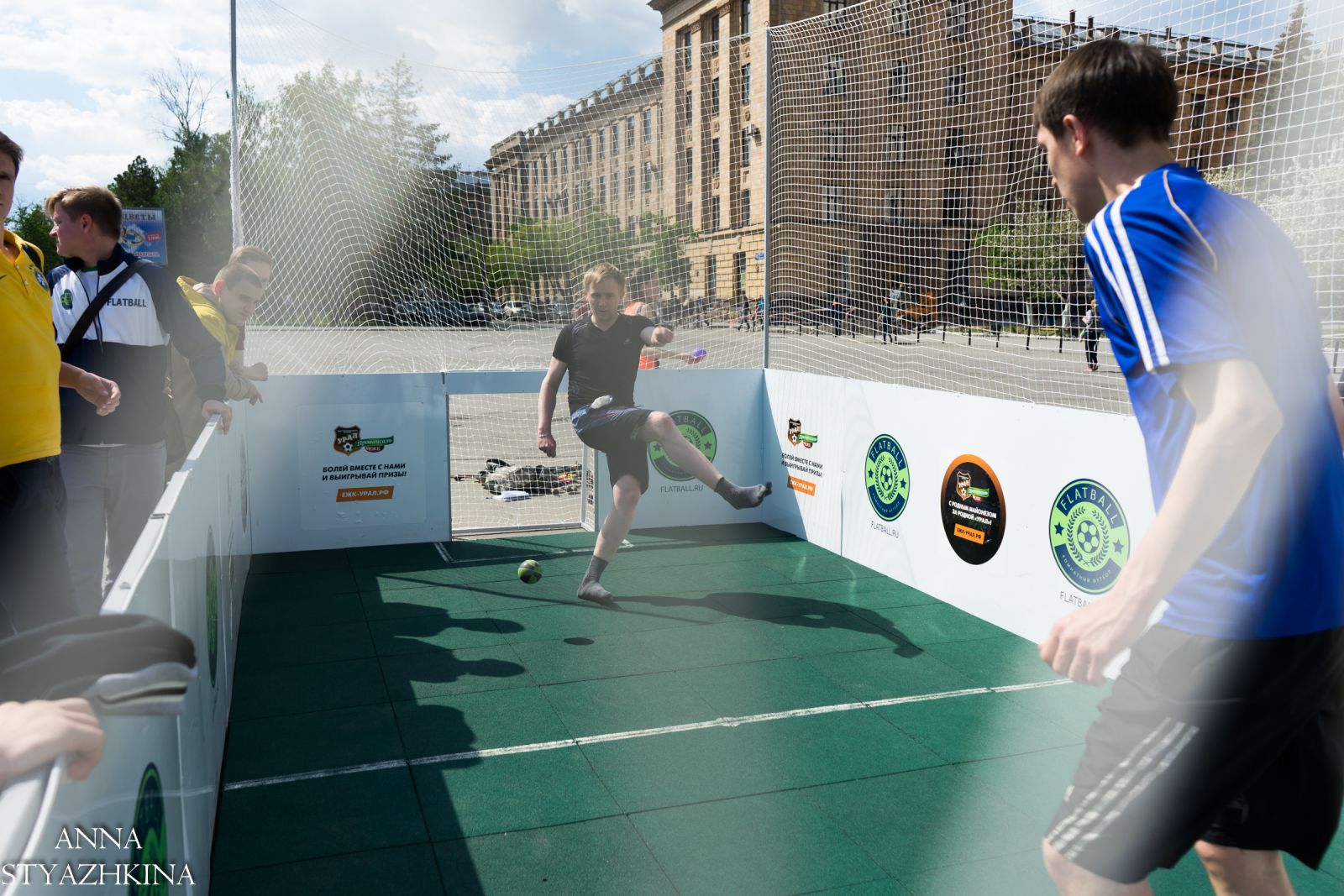 Aside from sports which required physical efforts, a pattern for playing checkers was drawn on the asphalt. Thus, there was a kind of impromptu play ground, on which people moved as checkers. Peculiar feature of this play ground was the way of getting expelled: the players were struck with a water ball, and so they understood that the game for them is over.

The Sports Festival is an amazing opportunity to get distracted from every day’s routine, learn about new tendencies in sports and discover interesting activities.