Lecture Course by Researcher from Slovakia Begins at SUSU 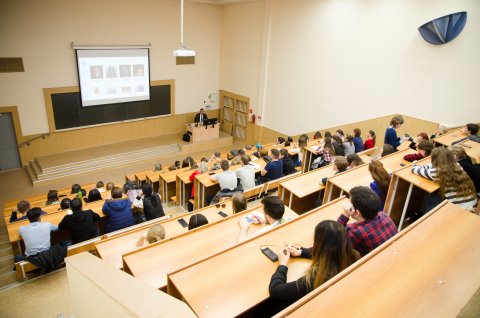 The first lecture of the head of the Laboratory of Neuropharmacology of the Center of Bioscience of the Slovak Academy of Sciences in Bratislava, associate professor of the Department of Food and Biotechnology of the SUSU School of Medical Biology, Ilya Dremenkov, on the topic “Normal and pathological neuropsychophysiology of eating” was held on May 30th within the 5-100 project and SUSU’s international partnership with international partners.

In his lecture, Ilya Dremenkov told SUSU students and teachers about the reasons behind craving sweets and anorexia and bulimia, which are some of the most widespread eating disorders.

The most important aspect of the lecture was information about the evolution of human nutrition, which began 7000 years ago with the domestication of grains and continues until this day.

Summing everything up, Ilya Dremenkov noted that eating disorders are seen in all psychological illnesses, and to understand the physiology of nutrition you must first pay attention to the evolutionary changes of man.

After the lecture, the audience was able to ask questions that were of interest to them.

On Wednesday, May 31st, one more lecture will be held entitled “The effect of physical activity on the central nervous system.” Everyone is invited to attend this lecture at 13:00, auditorium 103, building 6.