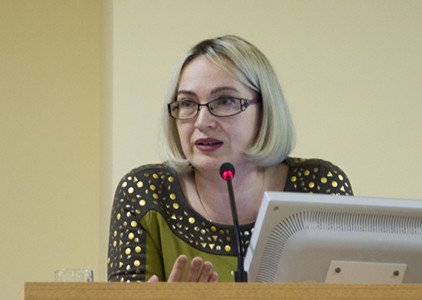 Nowadays preventing and fighting stress is one of the most relevant directions of modern studies. A SUSU scientist, Professor of the Institute of Sport, Tourism and Service Olga Tseylikman makes her scientific contribution to understanding of this problem.

– How do you think, how urgent is the stress problem today and what is it connected with?

– The urgency of the stress problem steadily increases in time, because stress is a universal reaction targeted at surviving in extreme situations, the number of which in the unstable society steadily increases. Unfortunately, this tendency is unlikely to decrease in the foreseeable future, considering the forecast of sociologists about further escalation of instability in the world. The Director General of the Russian Public Opinion Research Center Valeriy Fyodorov said that sociologists acknowledge escalation of geopolitical tension, calling it the “global turbulence”, which, of course, leaves a negative mark on people’s psychological well-being.

– What factors cause the highest stress?

– Without a doubt, the highest stress is psychoemotional; the reason for it lies in negative emotions. The stressors can be both the real traumatic factors, for example, violence, war, the loss of a close person, and the extremely negative perception of events that happen in everyday life. Excessive emotional and social overloads throw a person out of his stride, leading to serious worries. If a person stays in such state for a long period of time, he surely gets exhausted. He starts experiencing prostration of physical strength, the feeling of anxiety. This all leads to nervous breakdowns, neuroses, depressions and different types of deviations, including internal injuries.

– Please tell us about physiological mechanisms of stress.

– First of all, stress is a protective and adaptive mechanism of our body, one way or another influencing literally all the organs and systems. It is necessary to note that stress reaction of our body can occur both in a difficult situation and during a happy event, when a person has strong feeling of excitement. The key role in stress realization belongs to adrenal cortex’s hormones – glucocorticoids, the level of which significantly increases under the influence of a stressor. According to modern ideas, they are exactly the hormones which fulfill preparative function, related not only to suffering the current stress by the organism and preparing it to “explosive” actions, but also to the preparation of the organism to future stresses.

– What types of stress are there?

– As strange as it sounds, types of stresses are hard to be systematized, as there is still no common definition of this concept. Therefore, we can list the most known concepts. First of all, there are acute and chronic stresses. Acute stress is characterized by its rapidity and unexpectedness, when psychological balance upsets after a sudden event. This state doesn’t last long. Chronic stress occurs as a result of prolonged strain, during which a person’s organism is under constant exertion.

Our colleague from the Netherlands Professor Ron de Kloet considers the moderate by its level stress to be potentially useful for our body, as it activates the defense reactions, increasing the resistence of our organism to extreme situations. Domestic scientists call such stress physiological, and Hans Selye called it eustress. The primal danger is in chronic stress, even if it’s not the most intensive. In this case, sooner or later, organism will falter, resulting in fatal damages and disorders of different functions.

– For many people today stress is a constant phenomenon. What methods of dealing with stress exist?

– Nowadays there are many recommendations from psychologists and medics, for example, auto-training, yoga, adaptive physical exercises. But there is no universal advice, what is important is personalized approach, including complexes of medicated and unmedicated help, such as psychological training, adaptive medicine, functional nutrition, etc.

– You are working on a research of mechanisms of serious mental state – the posttraumatic stress disorder (PTSD). How did this research trend arose at SUSU?

– First of all, I should say that PTSD is one of the most intractable maladies that can occur after an upsetting event. Surely, the degree of PTSD development depends on the level of the person’s participation in the upsetting event, his personal characteristics, and the social context, in which he exists after the experienced trauma. Still the development mechanism and ways for treatment of this serious disease are not studied completely. The unsolved problems in this field are related to both delayed character of the disease and the search for effective medicine which is capable of helping a person to deal with PTSD.

The first serious center for studying adaptation to stress situations in Russia was Moscow laboratory of professor Felix Zalmanovich Meerson at the Institute of General Pathology and Pathophysiology. He was a generator of new ideas and a founder of a new discipline which is called “adaptive medicine”. His works still haven’t lost their relevance and scientific importance. The issue that he addressed – the phenotypic adaptation – actively attracted researchers from all over the country, who afterwards spread ideas and developments, new modern approaches and assumptions in their cities. This is how a galaxy of researchers who are still proud of their affiliation to the Meerson’s school of thought was born. In Chelyabinck such a researcher was professor Vera Ivanovna Pavlova. One of my academic advisors on doctoral dissertation, Vadim Eduardovich Tseylikman, made his first steps in science under her supervision, and afterwards he defended his candidate’s dissertation and continued developing this research trend. In 2005, after defending my doctoral dissertation, I managed to initiate stress research at SUSU. The conducted research for the first time uncovered the role of liver in regulation of stress and its consequences. For example, for PTSD, the low rate of adrenal cortex’s hormones is typical compared a healthy person, which is caused by a certain state of liver’s microsomal enzymes that we are now studying. Recently we won a prestigious grant of the Russian Science Foundation for studying the state of liver under PTSD. We believe that our research will develop, and we will try to put an effort for obtaining new knowledge in this field.

– What is the practical relevance of this research? Will it help to the workers of law-enforcement or security agencies, to the ambulance workers, whose professional activity comes along constant stress?

- Our research, primarily, is of fundamental nature. Determination of molecular mechanisms of any of scenarios for the development of physiological processes doesn’t always leads strictly to the production of a “pill”. But nevertheless, it might have practical relevance in case we manage to identify early markers of PTSD, which would indicate the presence of illness long before its clinical implications. In this case, without a doubt, the research will be useful for those whose job is connected to professional stress.

– How do you see the further development of the topic of stress and PTSD?

– The further development lies in more profound studying of PTSD development mechanisms on the basis of interdisciplinary research and developing complex and personalized approaches for their correction. First of all, it is necessary to develop well-trusted criteria in order to forecast the exposure and resistance to PTSD among people who experienced psycho-traumatic events. Our academic partner from the Australian University professor Julio Licinio believes that studying the nature of organism’s resistance to PTSD nowadays is a very pressing matter. Solving this problem will allow for developing approaches for increasing resistance to PTSD among people exposed to the development of such disease.