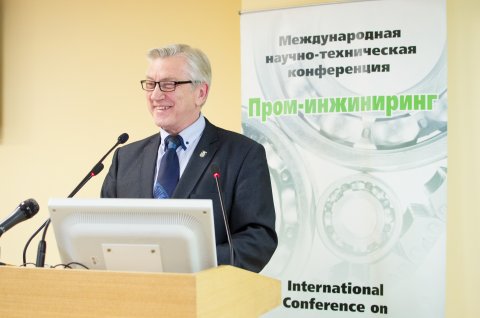 On May 16, the international scientific and technical conference “Prom-Engineering” was held at South Ural State University.

Traditionally, the opening of the conference began with a greeting. The Rector of SUSU Alexander Shestakov wished effective work to all participants:

“At this conference we have an opportunity to communicate with colleagues, to find like-minded people – it is a great possibility to form a networked scientific community. The materials obtained as a result of this conference will be used for the overall development of science in Russia,” said Alexander Leonidovich.

International scientific and technical conference “Prom-Engineering” is devoted to discussion of modern achievements in the field of industrial engineering. It is organized with a view to support interdisciplinary discussion and publication of research results that generalize the research of domestic and foreign authors in the technical fields of knowledge. Scientists from universities, research institutes, large industrial enterprises and scientific and production associations share their experience at the “Prom-Engineering”.

The purpose of the conference is to inform scientists and practitioners about the most promising areas of research and achievements in the field of industrial engineering.

It should be noted that all the reports were made in English. One of the speakers of the conference was Doctor of Technical Sciences, Professor of SUSU Sergei Sapozhnikov. His work was devoted to the study of mechanical and functional properties of new thermoplastic nanocomposites.

At the sectional meetings, issues related to the design and technical support of machine-building industries, new functional materials and technologies, industrial mechatronic systems and robotics, etc. were discussed.

Following the results of the conference, the articles of the participants will be published in journals indexed by the Scopus and Web of Science scientometric databases.