May Day – a Wonderful Holiday of the World 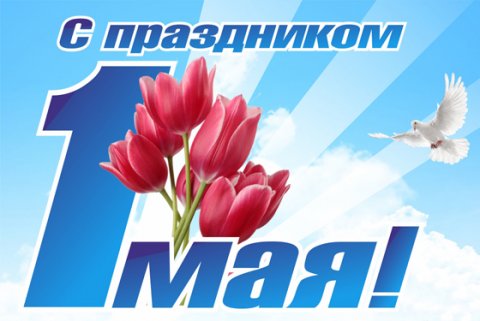 “Peace! Labor! May!” Everybody knows this slogan from their childhood. And although Russian students are likely to associate May Day with holidays and Saturdays clean-ups, the celebration represents arrival of warm and sunny spring time and, what’s more important, fighting for workers’ rights. Labor Day originates from more than 100 years ago. In the 19th century Australian and American workers organized a series of demonstrations demanding eight-hour workday. Back then people worked 12 hours a day, 6 days a week. Despite bloody clashes with the police, the wave of demonstrations spread through all Europe. In three years a resolution to proclaim the 1st of May to be the day of solidarity with the workers of the world was signed in France. Nowadays May Day is celebrated in 142 countries of the world, and each country has its own traditions for celebration.

On this day, Australian people recall those who fought for workers’ rights and for decent working conditions. Modern celebration is a part of three-days’ holiday when Australian people rest from work, spend their time with family and friends, play sports, organize BBQ parties and take part in parades and demonstrations. Other Australians go to the coast, mountains or just out of the city, where they enjoy picnics, wine testing or camping.

Great Britain celebrates May Day on the first Monday of May by organizing street festivities, fairs and parades.

May Day celebrations in Great Britain originated from other events than walkouts and demonstrations of workers. Historians can’t come to an agreement on what originated this holiday. Some say that May Day took its origin from the Rome Empire, whose citizens celebrated arrival of summer by worshipping Nature. Others think that May Day is a descendant from ancient rituals of worshipping the Maypole, resurrection of living things and beginning of farming. Therefore, on the first Monday of May streets of the island country get makeover; people get carried back to the medieval world with jugglers, circus artists, street musicians, treats from cook shops and archery and dance around the Maypole decorated with ribbons, the symbol of peace that connects the sky and earth, impersonating Jack in the Green (a nature god).

Some people associate the 1st of May with the Labor Day, and some people – with the wishes of peace and joy. On the 1st of May Hawaiian Islands traditionally celebrate official Lei Day (Lei is a flower neck garland), as Lei is the main symbol of the archipelago and major part of Hawaiian culture. Leis are given to distinguished guests and tourists as a sign of welcome and respect. The most beautiful Lei Day, celebrated on the islands since 1929, is the merit of poet Don Blanding. Countless numbers of beautiful flowers, which on this day are the major part of exhibitions, outfits, workshops and decorations, unite people of all ages. Making a flower lei is full of profound meaning. It is said that a lei maker puts a part of his soul into the work, “weaves” it into the flower garland to share a part of himself with the person to whom this present is meant. On this day, people on Hawaiian Islands learn to play ukulele, hold master classes for making leis and dance the traditional Hawaiian Hula dance. Besides, on the 1st of May people name the Lei Day Queen, a girl who can make the most beautiful leis and demonstrate fluency in Hawaiian language. As say the Hawaiians, “May Day is Lei Day!”

Canada and the USA

While the Labor Day in European countries is in the beginning of May, Canada and the USA celebrate this holiday on the first Monday of September. Historically, it is precisely in September 1882 when American workers marched through New York demanding eight-hour workday and fair working conditions. And even though in Canada peaceful demonstration took place a decade earlier, they were American workers who initiated this holiday.

Although ideology of the Labor Day on the first Monday of September in Canada is still present as trade union leaders and politicians give public speeches, many people associate this day as a part of prolonged holiday and prefer going out with family and friends, hold picnics and have fun. By the way, on this day Canadian Rescue Service celebrates its foundation; in shops children are given books about life safety. In Canada schools re-open for the new academic year right after the Labor Day, so this day many people go shopping to get ready for school. Besides, on the first Monday of September agricultural fairs and car racing start in Canada.

In the USA the Labor Day signals for the end of summer. This day most of firms and state institutions are closed. Same with Canada, the new academic year in America starts after the Labor Day, therefore many people prefer taking a good rest and spend a great time with their families on picnics.

In Finland, the May Day celebration goes back to its distant pagan origin. In pre-Christian Europe, pagan deities of fertility, harvest and fields were worshipped in the beginning of May. This day signaled for spring overcoming winter, when darkness was receding and light was coming. The day before the 1st of May people were lighting fires, organizing noisy festivities and ringing bells to scare away evil spirits. And so people celebrated the Walpurgis Night.

Aside from the beginning of spring, May Day for the Finns is also the day of all students. On the 30th of April starts Vappu, a holiday which all the Finns love. Students wear white caps – the symbol of student years and nearing enrollment at the institute. On the 30th of April at 6p.m. students solemnly put on a white cap on the famous fountain in Helsinki – Havis Amanda, accompanied by orchestra. Then take place the festivities – the biggest party of the year.

The festivities smoothly turn into celebration of the 1st of May. From the early morning there are meetings and marches in Finland, and the national flag is run up. Political parties give public speeches promoting their work. The Finns visit monuments and tombs of those who died fighting for workers’ rights. Many Finns prefer to spend this day in nature enjoying picnics and bathing in warm sunrays. On this day Finland restaurants open their screened-in patios, from which people can watch city festivities and marches.