Exclusive Teleconference with CERN Employees to be Held in the “KSTATI. Coordinate System” Science Festival 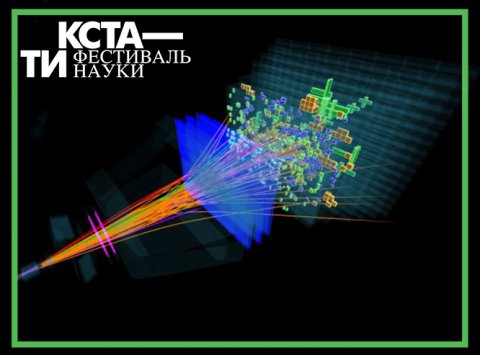 The final day of the “KSTATI. Coordinate system” Science Festival (Friday, April 21st) will be remembered by Chelyabinsk residents for its unique events. Among them – a teleconference with CERN and the premier of the Science Drama project. The final event will be the popular science talk show “Examine down to the atoms”.

CERN is a European organization for nuclear research and the largest laboratory of high-energy physics in the world. The researchers are ready to answer questions about projects in which Russians participate, including the legendary Large hadron collider. By the way, recently it was published that the international collaboration LHCb, working at CERN, discovered symmetry deviations between various kinds of leptons. It is possible that this is a sign of the presence of a new, fundamental particle, called the Z’ boson, or possibly some occurrence unknown to new physics. Chelyabinsk residents have a chance to find out more about this! The exclusive teleconference with CERN employees will be held within the “KSTATI. Coordinate System” festival on April 21st in SUSU’s SIGMA academic center (pr. Lenina, 78v). It begins at 13:35, entrance is free. Register at this link.

Participants in the project “Science Drama”, under the guidance of director Oleg Ivanov, will present a play by Chelyabinsk poet and playwright, Konstantin Skvortsov, dedicated to the founder of the soviet atomic project, Igor Kurchatov. The reading will include both professional actors (Honored Artist of the Russian Federation Mikhail Yakovlev, actor from the Chelyabinsk Academic Theater of Drama named after Naum Orlov; Kira Khanzhina, actress from the Chelyabinsk Youth Theater; and Pyotr Oliker and Aleksandr Balitskiy, actors from the New Artistic Theater), and talented artistic researchers: candidate of medical sciences Yekaterina Mozerova, candidate of historical sciences Nikolay Antipin, candidate of physical and mathematical sciences Aleksandr Gerasimov, and researcher of the ICBFM of the SO RAS Daniil Gladkikh. Ilya Kabanov, head editor of the internet almanac metkere.com will be playing the role of Kurchatov. The project’s premier in Chelyabinsk will be held April 21st in the regional scientific library (Pr. Lenina 60), beginning in 18:30.

Finally, the final event of the “KSTATI. Coordinate system” Science Festival will be the popular science talk show “Examine down to the atoms: coordinates of the future” in the creative space “Lyceum KTs11” (ul. Klary Tsetkin, 11). The astrophysicist Sergey Zamozdra (Chelyabinsk), nuclear engineer Andrey Akatov (Saint Petersburg), and biologist Daniil Gladkikh (Novosibirsk) will discuss the possible movement of humanity to exoplanets, sources of energy for the next generation, cloning, and different questions of biofuturology. “Examine down to the atoms” will be held at Chelyabnisk for the 10th time already, and head of the Novosibirsk ICAE, author of this format, Kirill Loginov, will be master of ceremonies for the anniversary of the talk show.

The “KSTATI. Coordinate System” Science Festival is organized by the Chelyabinsk ICAE with support from state corporation Rosatom and the Office of Youth Affairs of the Chelyabinsk city administration. “KSTATI” is a national science festival, which the chain of informational centers for atomic energy holds in different Russian cities and abroad. More than 200 events have already been held since 2015 as part of this festival with an audience of more than 40,000 people.