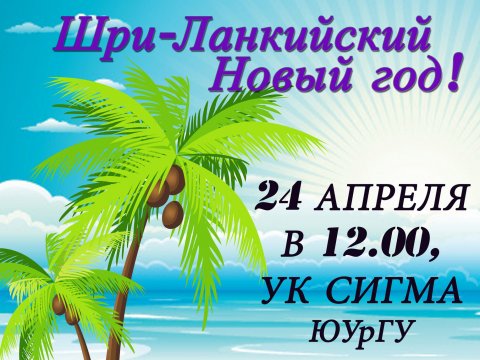 On April 24th at the Sigma building, Alut Avurudu will be celebrated. Alut Avurudu is the National New Year in Sri Lankan (Ceylon) tradition.

Alut Avurudu is a family holiday. On this day, Sri Lankans located outside of their home country try to return home. SUSU students from this country decided to share the joy of this holiday with their teachers and university friends.

The holiday symbolizes the completion of the old year and arrival of the new one. The exact time of the New Year is calculated every time by astrologists, down to the minute. This is the time to burn the first new year fire, the time to prepare rice with milk in this year, the time for the first feast, and many more.

Alut Avurudu is a unique holiday which brings together Hinduists and Buddhists. At SUSU, it not only brings together students from Sri Lanka, but also different students of the Institute of Linguistics and International Communications who study Russian together.

This year, the theme of the holiday party at SUSU is a trip to Ceylon. The invitations were individual tickets like airline tickets.

All of the guests of the holiday will get to see performances by students of the Institute of Linguistics and International Communications and get to know the history and traditions of Alut Avurudu.

The unique thing about this holiday will be tasting national foods from Sri Lanka. The Sri Lankans stress that “Ceylon – the island of tea” is a stereotype. The centerpiece of their culture is rice. The islanders’ favorite food, the famous rice with coconut milk – kiribat – and other treats will be available for tasting at the end of the event for all who wish to try.

The event will be held April 24th at 12:00 in the Sigma building. Entrance is free.