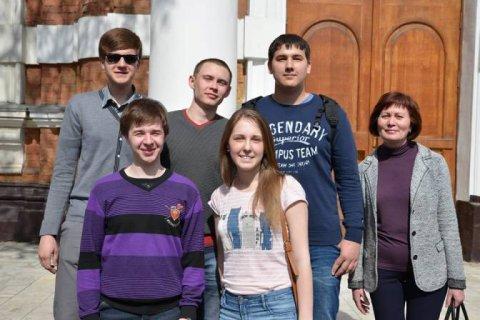 On April 11 – 14, the 12th International Student Olympiad on Theoretical Mathematics was held in the city of Homel’ of the Republic of Belarus. The team of the South Ural State University has participated for more than 10 times in the annual prestigious competition and repeatedly took medal places.

This year 133 students - representatives of 35 universities of Belarus, Israel, China, Poland, Russia, Turkmenistan and Ukraine met at the Belarusian State University of Transport. Our university was represented by students of the Faculty of Architecture and Construction and the Faculty of Aerospace Engineering: Ekaterina Pankova (AS-301), Evgenii Mikhailov (AK-404), Ruslan Takiev (AS-302), Pavel Lukinykh (AS-234), Kirill Hazhiahmetov (AK-204).

Olympiad was conducted in two stages: the main contest is theoretical one and “Brain-ring.” At the theoretical stage during four hours students solved eight extraordinary problems on the main sections of theoretical mechanics: statics, kinematics and dynamics, and then proved the correctness of their reasoning and mathematical calculations during appeal. A vicious battle ended with the victory of our team.

Ekaterina Pankova showed the best result in the individual competition and became a total winner. Evgenii Mikhailov and Ruslan Takiev enlarged the collection of the University awards with the diplomas of the second degree. 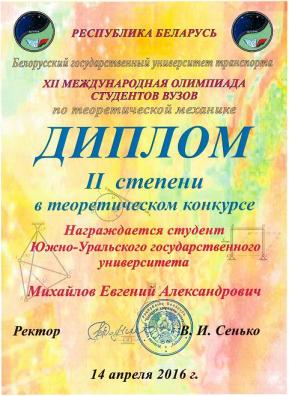 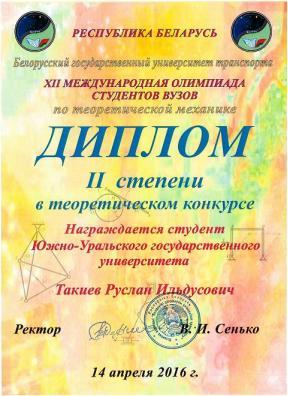 The next stage of the international competition was a contest connected with solving brief problems of the contest "Brain Ring". Within one hour the teams of three students had to solve 30 problems on all topics of the course of theoretical mechanics. The main team of SUSU took the 1st place. And the students Pavel Lukinykh and Kirill Hazhiahmetov teamed with Denis Benderov - representative of the Ufa State Oil Technical University and took the 2nd place, showing the best result among teams. Participants of the international forum both worked productively and communicated with each other with pleasure, made new friends, walked through the alleys of the famous Gomel Park and the waterfront of the Sozh river.

The training of the teams of SUSU on theoretical mechanics was held by the lecturers of the Department of Theoretical Mechanics and Machinery Design Basis Valentin Karavaev, Iurii Priadko and Svetlana Slepova.

Congratulations to the students and academic instructors of the Department of Theoretical Mechanics and Machinery Design Basis with a wonderful result!