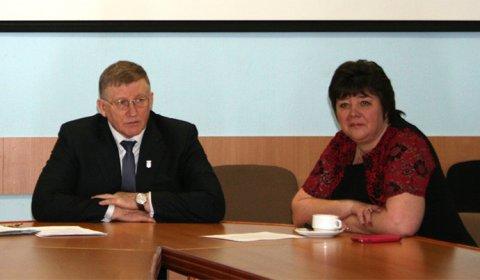 On March 29, SUSU Rector Alexander Shestakov met directors of schools, lyceums and gymnasiums of Chelyabinsk. Alexander Leonidovich told the heads of educational institutions about ongoing changes at the University as a result of its participation in the 5-100 Project. Special focus was on the position of SUSU in the hierarchy of Russian universities and international rankings and cooperation with schools, lyceums, gymnasiums, and colleges under new conditions of the University development.

A number of suggestions for improvement of social partnership between SUSU and educational institutions of Chelyabinsk were discussed at the meeting. It’s planned to establish engineering, natural science and the humanities schools for prospective students, organize “Summer school of SUSU”, and special training of teachers at the premises of the University and field-specific university classes at schools.

The groups of elite training are organized in the process of implementation of the Road map. In such groups lyceum and gymnasium graduates will learn the material at the level which corresponds to their abilities. The objective of elite training is to create conditions when more ambitious students get world-class education in the home town and in the future form the brainpower of Chelyabinsk.

The rector emphasized that today the main goal for the University is to hold leading positions in the global scientific and educational space. In this regard well coordinated interaction with directors of secondary education institutions, responsible for orientation of schoolchildren to get higher education at the largest university of the region is of key importance.

During the meeting the head of the Education Affairs Committee of the Administration of Chelyabinsk Svetlana Portie spoke to the audience. Svetlana Viktorovna noted that in cooperation between higher and secondary education schools an actual result consisted in the quality of specialist training is highly important.