All-Russian Sports Event of Sports Complex "Ready to Work and Defense" at SUSU was organized at high international level!

12/26/2012
December 14 in the capital of South Ural Region the first International Festival of Sports Complex "Ready to Work and Defense" in Russia has started on the basis of our University. This sports event is devoted to the 100th anniversary of Pokryshkin A.I., three times Hero of the Soviet Union, and to the 69th anniversary of SUSU.

The program of the Festival of Sports Complex "Ready to Work and Defense" included:  100 metres, 500 metres (for girls), 1000 metres (for boys), broad jump, push-ups (for boys) and abdominal crunches (for girls), shooting sports, swimming. The refereeing of all types of combat sport was carried out by the specially trained volunteers – more than 30 students of SUSU Faculty of Physical Education and Sports.

At 11:00 the fanfares sounded solemnly and the parade started the opening ceremony in commemoration of the first International Festival of Sports Complex “Ready to Work and Defense” of Russia. The cadets of Chelyabinsk Cadet Corps named after A. Nevsky passed by with decorations and banners in their hands. Then the referees followed the boys. Right behind the referees there were school children (Secondary General School No. 155 and No. 62 of Chelyabinsk) and students from Russia, China, Sri Lanka, Iraq, Mongolia and Kazakhstan. The opening parade was attended by Shulga Y. A., President of National Business Club affiliated to the  RF Government; Bykov E.V., Professor and Dean of Physical Education and Sports  Faculty of SUSU; Kuzenkov V.A., Major General and Chairman of Regional Council of Special Voluntary Movement; Baybarodin A.V., Colonel, Representative  of  Regional Office  and  Chief of Chelyabinsk Regional Technical School of Voluntary Association for Assistance to Army, Air Force and Navy; Kachuro I.L., Head of Training and Additional Education Department of Chelyabinsk Educational Administration; Angelovsky A.A., Deputy Director of SUSU Institute of International Education; and Eliseev E.V., Professor, Coordinator of Festival program, Head of Sports, Tourism and Physical Recreation Department of SUSU.

The cadets opened the event  with their performance «Drummers’ Show». Then the dance group “Eridans” showed their magnificent performance so did the  sportsmen from Sports Club of Combat Sport “Medved” of Kopeysk Technical School of  Voluntary Association for Assistance to Army, Air Force and Navy.

The unique technology of collecting and processing of the Festival’s materials based on the statistical computer programs which were specially invented by Chipyshev A.V., Associate Professor, Chief Referee and Vice Dean of Physical Education and Sports  Faculty, allowed to see both team and personal results of the competition participants in real time. 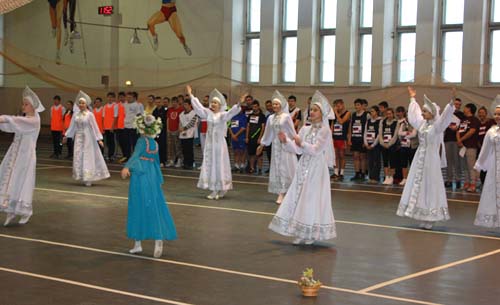 The closing ceremony of the International Festival was as solemn as the opening. The foreign students who participated in the International Festival of Sports Complex “Ready to Work and Defense” were awarded by the organizers of the event with special certificates which gave the right to be the representatives and social trainers of Russian “Ready to Work and Defense” programs on the territory of their countries. All the participants who had successfully passed normative tests of Sports Complex “Ready to Work and Defense” were given "silver" and "gold" badges and the certificates of the state-approved format. The teams-winners gained diplomas and New Year souvenirs. The most active teams of the Festival were the team of Trade and Economic Faculty and the team of SUSU Institute of International Education.

All the participants of competitions were excited. After the Festival they stayed for some time, took pictures and sincerely thanked the organizers of such a great event.

Evgeny Eliseev, Professor and coordinator of the event, noted: "Certainly, the idea of revival of the Sports Complex “Ready to Work and Defense” on the territory of the Russian Federation subjects is not only current issue,  it is  also up to date solution for the development of  physical education and sports movement in Russia. In Chelyabinsk region we revived traditions and managed to give a new, international sense to the  idea of the Complex “Ready to Work and Defense”. This is the sense of an international festival of friendship, power, skill, accuracy and endurance. Within the Festival program we managed to unite the efforts of the University Administration, Management of Educational and Sports Complex, Institute of International Education, Trade and Economic Faculty and Faculty of Physical Education. Our University team was supported by the management and departments of regional offices of Voluntary Association for Assistance to Army, Air Force and Navy and special voluntary movement. We achieved the great results. Today everybody became the winner! Finally, physical training brings the people together and makes them healthier!".