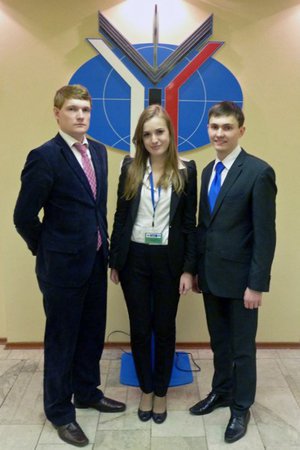 November 22-24 Moscow State Institute of International Relations (MGIMO-University) held the VI All-Russian Congress of Political Science “Russian in the Global World: Institutions and Strategies of Political Interaction”. Thousands of political scientists, researchers, experts and analysts from 34 countries from all over the world took part in that Congress. The Congress had been convened by Russian Political Science Association (RPSA).
The postgraduates and students took an active part in Forum of Young Scientists which had been organized by the youth division of RPSA. Within the framework of the Congress the General Meeting of RPSA Youth Division took place where the new leaders had been chosen and a new development program had been approved.
Kirill Gontsov, five year student of SUSU and political scientist, had been elected as the President of Youth Division of Russian Political Science Association. Previously he was the Head of RPSA Chelyabinsk Division. Elizaveta Okunyova had been elected as Vice President (Moscow, National Research University Higher School of Economics).
Anton Artyomov, first year postgraduate of SUSU, had been elected as Chairman of Professional Association of Young Political Scientists. Previously he was Deputy Chairman of Chelyabinsk Youth Division of RPSA.

The new administration presented at the general meeting the strategy for developing Youth Division of RPSA up to 2015 (morapn.ru). According to that program the division will continue its principal scientific researches, realize its publishing and educational activities and to work in research groups.
Event date:
Monday, 3 December, 2012 - 09:00