SUSU at the Forum Campaign of Summer 2019 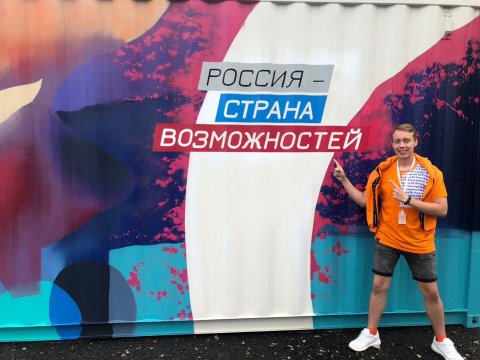 Project activities are rapidly developing at SUSU. Over the last three months, our students obtained more than 10 grants which are to be implemented within the academic year.

Venue number one was the all-Russian contest of youth projects for natural persons. Experts have chosen the initiatives of our students: Aleksey Kosarev, Valeria Chachina and Kirill Chernoshvets.

This summer, Aleksey Kosarev have arranged a regional educational meeting of volunteers called SVOBODA (Freedom). There he prepared volunteers for the selection to the Volunteer Corps for the international events of 2020. Ural Troopers is the project by Kirill Chernoshvets. Its purpose is to provide assistance in settlements of the region. Students are going to visit villages and rural areas to conduct master classes and career guidance classes. The project by Valeria Chachina is a forum of international students and alumni. URAL FEST will bring together international students from all over the Urals in order to implement large-scale projects and exchange experiences.

Also, our university obtained 3 million in the all-Russian contest of youth projects among educational institutions of higher education.

The SUSU School of Information Technology Outlooks is the idea of Elena Bunova and Vlad Serov.

The authors of 7Fest: Everyone’s Near! regional family festival are Ksenia Gernega and Ilia Krokhin.

Ekaterina Kalugina, the Chair of the Ural Hawk student sports club is getting ready to implement a project entitled “SUSU is into Sports”.

“The event that we are going to arrange called SUSU CUP. This is a tournament in five team and individual sports: volleyball, football, basketball, table tennis and chess. This is a good opportunity for everyone to show their talents no matter the level of their physical condition. The tournament will conclude with the SUSU Sport Fest. We will arrange free ice skating session for all students, in the course of which they will be able to become a part of SUSU’s sport movement,” said Ekaterina Kalugina.

At the UTRO (Morning) Forum, Egor Ustinov became the holder of a grant for implementation of the project for Voskhod (Sunrise) space platform.

“My project will let schoolchildren of our city to learn more about cosmonautics and astronomy. We will have classes in a mobile planetarium, arrange excursions and introduce schoolchildren to associations of the city in which space-related sciences are being studied,” said Egor.

At Baikal Forum, the Head of Katalitsa project, Katerina Kartavykh, obtained a grant for Katalitsa educational, social and sport marathon. It is dedicated to the problems of ecology and involvement of young people into various activities.

“My goal is to make extremal sports more available for young people and to prove that one can spend their leisure outdoors while living in a city. For that, we should clean up usable lands, which we are going to do at the marathon. The common opinion on the danger of such sports is incorrect. Extremal sports are much less hazardous compared to contact football or basketball,” said Ekaterina Kartavykh.

This year, the Territory of Meanings forum has become the most fruitful one. There, our students obtained three grants. Tatiana Busorgina is going to create a youth center called Vtoroy (The Second). This will be the venue for holding workshops, anti-lectures on responsible consumption, and swap-evenings for exchanging with things.

Anastasia Ershova together with volunteers from four regions of Russia will place art installations made of plastic corks by design drawings of children from orphanages in various cities throughout the country. Nikita Kovalev obtained a grant for the urbanistic project called STROYKA (Construction site) 2.0 that has become favorite among SUSU students.

“We want to make STROYKA a massive project which will bring students together. We are going to develop it together, make new stages. Right now, we have the money, the possibility and the huge desire,” said the grant holder.

Tavrida was another forum held at participation of our students. Rinat Saraev took the money for the Week of Creativity. Before that, the Festival was held at SUSU only, but in this year it’s going to become city-wide. The concept remained intact: attracting the youth to creative activity.

“Each participant can fulfill oneself in the activity they are interested in. Six days of the Festival are specially designated for every participant to be able to test themselves in each type of arts,” said Rinat Saraev.

Ekaterina Slugina obtained two grants at once. She is implementing a cycle of scouting expeditions called “Searching till the End…”, during which the scouts of Yuzhny SUSU scouting forces will perform training of new scouts by taking them on expeditions. This spring, the best attendees will go to the Memory Watch – 2020 all-Russian flash mob. The second grant is for the project called “It’s Time to Cook”, designated to teach the youth from orphanages the culinary art and introduce them to the profession of a chef. The best attendees will have a chance to get employed to cafes and restaurants of the Chelyabinsk region or get enrolled for a degree in culinary.

As a reminder, the SUSU Student Union started implementing project-based activities. The supervisor will be Nikita Korolev, the holder of the grant for STROYKA 2.0. Together with the team, Nikita is going to assist students in obtaining grants for their initiatives and bring their dreams into reality.