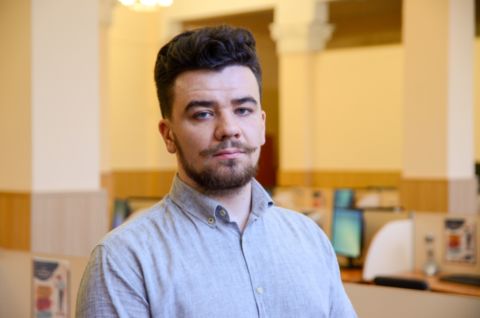 A postgraduate student Egor Leshkov won the UMNIK competition and received a grant for his project “Development of a Method for Calculating Products from Highly Nonlinear Composite Materials for Packages Implementing the Finite Element Method”. The project aims to create a new software tool for engineers specializing in strength calculations.

The brittle deformation of traditional carbon-, organic- or glass-reinforced plastics determines their sensitivity to stress concentrators. One of the topical solutions to this problem is hybrid composites composed of various components. SUSU scientists conducted an experimental study of the effect of hybridization on the effective stress concentration coefficient (stretching of a sample with a hole) for pre-designed organo-, carbon- and glass-reinforced plastics.

“Our development combines a number of advantages previously available in separate solutions of foreign professional software developers poorly coordinated with each other. In addition, this solution allows the use of more efficient calculation methods, experimental data obtained during standardized tests, which significantly increases the speed of development of new products and designs. This project grew out of the scientific work I did during my undergraduate and graduate studies,” Egor explains.

The proposed software will make it possible to more fully use the strength resources of composite materials, improve energy efficiency and safety of new composite structures. The purpose of this development is the calculation of the deformation kinetics of composites with developed nonlinearity.

“For me, winning the UMNIK contest is a sign that the path we have travelled to date has not been in vain, and we need to continue to work harder and harder. The most difficult thing was to bring the idea of the project to a state where it could be of interest to real consumers. I wanted to take part in the grant two years ago, but decided to postpone it until I could clearly articulate the idea of the final product from the original scientific task. When writing an application, one has to switch from a “scientific” approach to a “commercial” one. For students, graduate students and young scientists who are used to working within the framework of grants from the Russian Science Foundation and the Russian Foundation for Basic Research, this may not be easy but if you believe in your idea and clearly understand the specifics of UMNIK, then you will succeed!” says Yegor.

The work is carried out on the basis of the SUSU Center for Applied Research and Development of New Structural Materials under the guidance of Professor of the Department of Technical Mechanics Sergey Sapozhnikov. In this project, the graduate student independently manages the workflow, while colleagues and the supervisor provide substantial consulting support.

Based on the results of work in co-authorship with the supervisor and colleagues, eighht articles were published in peer-reviewed journals.

South Ural State University is a university of transformations, where innovative research is carried out in most priority areas of science and technology development. In accordance with the strategy of scientific and technological development of the Russian Federation, the university focuses on the development of major scientific interdisciplinary projects in the field of digital industry, materials science and ecology. In 2021, SUSU won the competition under the Priority 2030 program. The university performs the functions of a regional project office of the Ural Interregional Research and Educational Center, designed to solve the tasks of the national project "Science and Universities".

In the official Telegram Channel of South Ural State University you may read the last news of the university or ask your questions.