Scientists Solve the Problem of Antibiotic Resistance of Bacterial Strains 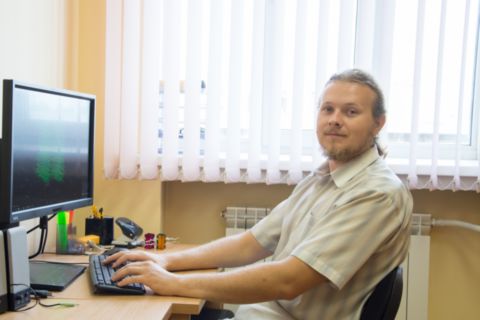 SUSU scientists model the dynamic pattern of interactions of a growing peptide with the walls of the ribosomal tunnel while adding new amino acids to the peptide in bacteria. This model is necessary for the development of new synthetic antibiotics effective against strains resistant to natural and semi-synthetic antibiotics. This is particularly relevant when considering the increasing prevalence of pathogens resistant to commonly used antibiotics.

The project is led by Gennady Makarov, Candidate of Sciences (Chemistry). This research is of great interest because some amino acid sequences (leader peptides) are capable of forming strong triads. They play a role in the formation of bacterial resistance.

"The bacterial ribosome is often the target of antibacterial drugs, with much of it acting on the ribosomal tunnel. Antimicrobial drugs stop protein synthesis after a certain number of cycles of amino acid residue attachment. Protein biosynthesis only stops when a newly synthesized peptide with a certain sequence of amino acids ends up in the tunnel," says Gennady Makarov, Candidate of Sciences (Chemistry), project leader.

The study is conducted at the SUSU Laboratory for Multiscale Modelling of Polyfunctional Compounds.

"There is an old and widely-studied antibiotic, levomycetin (chloramphenicol). Levomycetin is known to stop protein biosynthesis depending on the amino acid sequence of the growing peptide. In a previous project, we showed that levomycetin can bind in the ribosome in such a way that it can allow the growing peptide to pass, interacting with the peptide in the process. We propose the use of molecular dynamic modelling to obtain a model of interaction between the antibiotic and the so-called leader peptides, which are able to stop their own synthesis in the presence of levomycetin and thus regulate the synthesis of the enzyme that inactivates the antibiotic," explains Gennady Makarov.

The study of growing peptide-ribosomal tunnel-antibiotic molecular complexes can serve as the foundation for a model of the mechanism of antibiotics action. For example, scientists would be able to identify sensors in the ribosomal tunnel responsible for switching the ribosome to a "stopped" state. Scientists plan to identify the structures of the antibiotic-ribosome-stop-peptide triad.

South Ural State University is a centre of digital transformations, where innovative research is conducted in most of the priority fields of science and technology development. In accordance with the strategy of scientific and technological development of Russia, the university is focused on the promotion of big scientific interdisciplinary projects in the field of digital industry, materials science, and ecology. In 2021 SUSU became the winner in the competition under the Priority 2030 program. The university acts as a regional project office of the World-class Ural Interregional Research and Education Centre (UIREC).