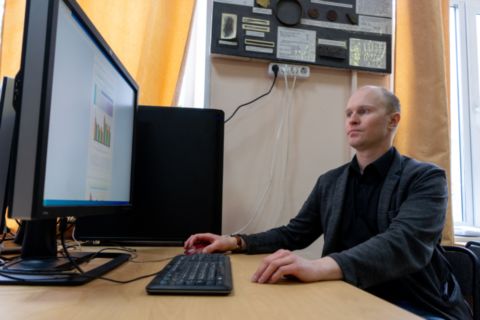 An international team of scientists from Russia and Austria have conducted a series of unique experiments to study the oxidative roasting of magnetite concentrate samples at different temperatures using the Rigaku Ultima IV high-temperature X-ray chamber. The new technology will reduce CO2 emissions by 40-60% by using hydrogen as a reducing agent. The Voestalpine plant (Austria) is pilot testing the technology.

Yuri Kapelyushin, a senior researcher at the SUSU Hydrogen Technologies in Metallurgy Laboratory, published a study in one of the major journals in the field of research, Metallurgical and Materials Transactions B (Q1), jointly with Professor Johannes Schenk from Leoben University.

Over the past few decades, the metallurgical industry has processed large quantities of high-quality hematite iron ores that were used as feedstock to produce iron through blast-furnace processing.

The dwindling reserves of rich hematite ores have led to an increase in their extraction and processing. In 2015, the global production of magnetite-based iron ore was approximately 583 million tons, representing 28% of total iron ore production. Magnetite-based iron ore is ground to fine particles to release magnetite minerals from the rock, followed by magnetic separation to increase the iron content.

"Current practices for producing iron from magnetite iron ore include pelletizing (or sintering) to produce lumps of a given size before loading into metallurgical units such as blast furnaces, grate rotary kilns, and Midrex shaft furnaces. Reducing CO2 emissions is currently one of the most important global environmental goals. To reach the goal of climate neutrality (zero greenhouse gas emissions) by 2050, new technologies for iron and steel production based on hydrogen must be created. The gist of the technology is to move away from the use of traditional carbon-containing reductants (such as coal or coke) and replace them with hydrogen. However, it is currently impossible to process magnetite ore without pre-oxidation even with the implementation of the hydrogen technologies being developed to reduce CO2 emissions," says Yuri Kapelyushin.

One of the additional advantages of hydrogen is that it can be used to accumulate and store energy. For example, when generating electric power using nuclear, wind, or hydro power plants, hydrogen can be produced by electrolysis, accumulated in hydrogen storage facilities, and delivered to consumers. Then direct reduction iron is produced in Midrex mine units (which Oskol Electrometallurgical Plant has been operating for quite a long time) with partial or full replacement of natural gas with hydrogen. The obtained direct reduction iron is already being used to produce various grades of steel in electric arc furnaces.

In Austria Voestalpine is conducting pilot tests using a different technological scheme. Iron is reduced from its oxides using hydrogen from fine particles in the boiling bed, and steel is smelted using plasma-arc remelting.

The teams of the SUSU Hydrogen Technologies in Metallurgy Laboratory and Leoben University planned and conducted unique experiments to study the oxidative firing of magnetite concentrate samples at various temperatures using the Rigaku Ultima IV high-temperature X-ray chamber, which is available at the university.

The idea for these experiments first emerged during discussions at a conference in Vienna, Austria, in 2018. Later, the authors were able to conduct this work at SUSU. The study has been released in the public domain.