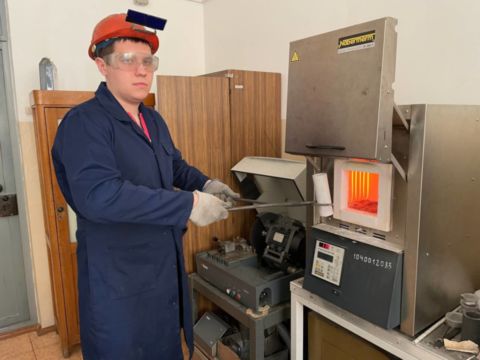 Environmental problems in the Chelyabinsk Region have long been among the most pressing ones. A Master's degree student from South Ural State University is working on a method that will significantly reduce environmental pollution from metallurgical waste. The project was supported by a grant from the UMNIK contest.

Currently, the metallurgical industry produces a large amount of waste which is detrimental to the environment. Many forms of waste are stored in dumps, polluting the soil and groundwater, but they can be re-processed and returned to production sites. Evgeny Grigoriev, a Master's degree student at South Ural State University, is working on a method for integrated recycling of electric arc furnace dust. His project leader and scientific advisor is Yury Kapelyushin, Candidate of Sciences (Engineering), Senior Researcher at the Department of Pyrometallurgical and Foundry Technologies.

"The final product will be cast-iron grinding balls. The novelty of the work consists in processing waste, extracting zinc oxide, and obtaining the cast-iron grinding balls. The main difference from existing methods is that during zinc production, the production waste (clinker) is discarded into waste dumps, and the iron content in the clinker exceeds 40%. Based on data from the literature, we can conclude that the balls obtained from this waste will be more durable than existing domestic analogues due to the content of alloying elements," Evgeny Grigoriev said.

At the moment, the team has completed thermodynamic calculation of the amount of reducing agent necessary for metallization of iron and removal of zinc from the mixture. A test batch of metalized briquettes was obtained to study their mechanical properties and the temperature regimes of reduction.

A series of physical experiments is planned: trial reduction in a vertical rotary furnace to obtain batches of briquettes, melting of briquettes to obtain cast iron and study its properties.

"Our goal is to obtain grinding balls to test their mechanical properties. In the future, we plan to investigate the possibility of dust recovery with hydrogen-containing gasses. This method can be used at zinc plants for the full cycle of zinc processing and obtaining additional products in the form of grinding balls. Grinding bodies are used in mining, ore processing, and metallurgical industries to grind ore. They can be used in ball mills. We are writing an article in which we will share our intermediate results," Evgeny Grigoriev added.

The project may be continued if the team’s experiments with hydrogen-containing gasses are successful. This is a promising area in metallurgy, in which work is being carried out all over the world.