A SUSU Graduate Creates a Portable Device for Electroencephalography 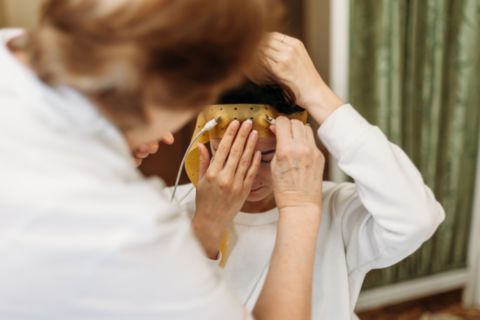 A graduate of South Ural State University created a new highly accurate and compact electroencephalography device. This device can be used at home and as needed. This development will help reduce the number of visits to clinics and hospitals, which is especially important during the COVID-19 pandemic. Invention concept Candidate of Technical Sciences Ildar Rakhmatulin, a graduate of the SUSU Faculty of Energy, together with colleagues from the University of North Carolina (USA) and the Skolkovo Institute of Science and Technology (Russia) are working on the creation of a new portable device for electroencephalography (EEG) of the brain. Scientists have created the concept of a compact and inexpensive gadget and described it in a publication in the highly-rated scientific journal Experimental Brain Research (Q2).

The concept of EEG device

Electroencephalography (EEG) is one of the most popular methods for examining the brain; it functions by tracking neural activity using electrodes placed on the skin of the patient's skull. EEG information is used for various purposes, including research and clinical applications. Many scientists do not deny the possibility of diagnosing diseases, for example, to improve recognition of mild forms of Alzheimer's disease. With the growth of electroencephalography-based applications, there is an increasing demand for affordable consumer solutions.

“We have described a compact and inexpensive EEG device for everyday use. Data is transferred from the device to a personal server, which provides wireless operation and a significant range of motion for the user. The device is compact, has a round shape with a radius of only 25 mm, which ensures comfortable daily use, day and night. Our solution is also very economical, around 350 USD, inexpensive compared to current Open BCI biosensors that cost over 1000 USD. Built-in noise cancellation enhances recording accuracy. We presented the results of testing the developed device and provided a detailed description of the steps required to create it,” Ildar Rakhmatulin explains.

Such equipment can use various types of electrode sensors to measure EEG signals. The highest quality signal is obtained with disposable wet sensors. However, one of the disadvantages of using wet electrodes is the instability of signal reception as the gel dries, which introduces significant changes in the measured signal. The electrode gel is also time-consuming to set up and requires the patient to rinse the gel off the hair after the examination. Registration of an EEG signal with a dry contact electrode is a more convenient way to obtain information about the functioning of the human brain since it avoids interference from the gel and saves time for installing and removing the device. Unfortunately, this method is not the most reliable and is not suitable for all scenarios. There is a relatively high risk of poor contact due to insufficient electrical connection between the electrode and the patient's scalp.

Many scientists have used similar equipment for various motor imagery experiments in which subjects imagined moving their limbs. A promising application of an inexpensive but functional EEG device is the possibility of using it as part of a brain-computer interface (Brain-Computer Interface, BCI). BCIs are used in various fields, the most important of which is helping people with disabilities.

“BCI devices, by converting signals from the brain into instructions for the computer, can control various actuators and perform actions that cause difficulties in real life. A more affordable EEG device will allow the development of affordable BCI devices for persons with disabilities. It will also help drive new research significantly because the newest high-quality EEG systems are often expensive,” says the author.

However, BCI technologies are not fully developed at the moment. Limiting factors include the small number of brain signals understood well enough to be used in applications and the need to recalibrate signal processing algorithms every session. Moreover, many BCI devices use machine learning to classify brain signals from EEG data, a process that requires significant amounts of consistent data. South Ural State University is a university of digital transformations, where innovative research is carried out in most of the priority areas of development of science and technology. Following the strategy of scientific and technological development of the Russian Federation, the university focuses on the development of large scientific interdisciplinary projects in the field of the digital industry, materials science, and ecology. In the Year of Science and Technology, SUSU won the competition for the Priority 2030 program. The university performs the functions of the regional project office of the Ural interregional scientific and educational center.