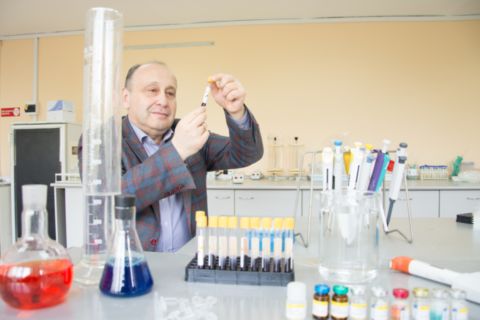 War veterans have helped scientists of South Ural State University identify biological indicators which signal whether people have a post-traumatic stress disorder or a susceptibility to it. The research results are published in the Journal of Psychiatric Research (Q1) top-rated scientific journal.

In their research works on studying post-traumatic stress disorder, the representatives of the SUSU School of Medical Biology have reached a new level. Earlier, they used an experimental method of stimulating post-traumatic stress disorder in rats and tracking changes in their bodies. Now, the world scientific community has been presented the results of the clinical study.

The work began back in 2016. More than a hundred people became participants: patients of the Chelyabinsk Regional Clinical Therapeutic Hospital for War Veterans and combat action participants who had not been diagnosed with the disorder. The scientists conducted clinical interviews with each participant and used diagnostic scales to assess the severity of the condition. At the same time, blood samples were taken to compare the changes in the body and determine the markers of PTSD.

“All participants of the research were separated from traumatic events by a long time interval: at least ten years. We managed to find out that even after a long time, the levels of cortisol and gamma-aminobutyric acid differed from the reference values. Gamma-aminobutyric acid appeared to be the most sensitive indicator, it can be considered as a marker of a long-lasting PTSD. A low acid level was demonstrated in a group of people susceptible to stress,” said Doctor of Sciences (Biology), Director of the SUSU School of Medical Biology Vadim Tseylikman.

All of those who had experienced traumatic events had elevated cortisol levels. It was this discovery that allowed the researchers to once again prove that despite extensive experimental studies of PTSD, the structure of the disease is not homogeneous.

“Thanks to this research, conducted by the Molecular Genetic Studies of Health and Well-Being Laboratory headed by Inna Feklicheva and by our colleagues from the Netherlands, Dr. Marco Boks and Dr. Ron de Kloet, we are now able to predict whether a person would be susceptible to PTSD or resistant to the disease after combat stress judging by the changes in blood plasma,” added Vadim Tseylikman.

The international team of scientists intends to continue the work and now consider changes in the genomic profile of people who have experienced traumatic events. The remaining blood samples will be examined. The SUSU’s consortium partner, the Institute of Cytology and Genetics of Siberian Branch of the Russian Academy of Sciences, will be engaged in this work.

Thanks to the research works by the School of Medical Biology, SUSU entered the RUR world ranking in the subject area of Medical Sciences and was listed in the top ten among Russian universities.

South Ural State University (SUSU) is a university of digital transformations, where innovative research is conducted in most of the priority fields of science and technology development. In accordance with the strategy of scientific and technological development of the Russian Federation, the university is focused on the development of big scientific interdisciplinary projects in the field of digital industry, materials science, and ecology. In the Year of Science and Technology, SUSU has become the winner in the competition under the Priority-2030 program. The university acts as a regional project office of the World-class Ural Interregional Research and Education Centre (UIREC).